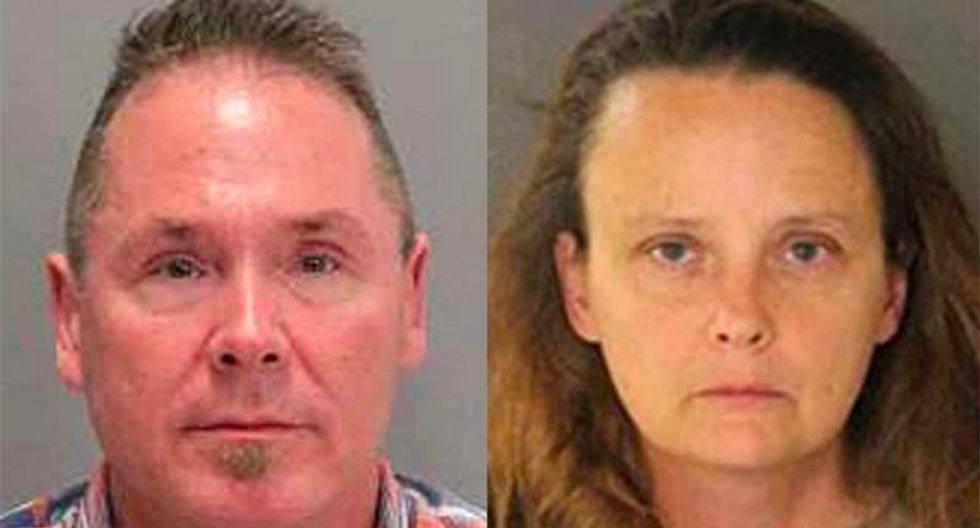 A California man and a Washington woman have been taken into custody for allegedly sexually assaulting two children -- aged 5 and 7 -- after an alert teacher witnessed the man texting how-to instructions while sitting on a plane.

According to the Mercury News, 56-year-old Tacoma resident Michael Kellar and Gail Burnworth, 50, were arrested by sex crimes detectives and FBI agents after they were alerted by the teacher over what she had seen.

Police state the pre-school teacher was on a Seattle to San Jose flight when she noticed Kellar sitting in a seat near her holding his phone close to his face and texting molestation instructions involving small children.

“It’s kind of mind-blowing,” explained San Jose  Detective Nick Jourdenais. “She gets on a plane, a normal citizen minding her business. A couple of hours later, she’s intervening on quite possibly the most traumatic thing children can go through. This was life-altering for them.”

“It was in large font, and she sees certain words and starts contemplating there’s something bigger there,” he added. “Then the conversation transitions to children. That’s the moment when she decided to preserve the evidence as best as she could.”

According to police, the teacher used her cell phone to snap pictures of the Kellar's texts before she alerted the flight crew who in turn notified the authorities.

Kellar was apprehended by police in California and turned over his phone -- but said that we was only "role-playing," before he was taken into custody.

Using Kellar's phone, police and FBI agents were able to track down Burnworth in her home in Tacoma where she lived with the two children who authorities believe were being sexually abused.

Sex crimes detective Jourdenais lauded the teacher, saying, "“We always preach ‘If you see something, say something.’ It was apparent to her to say something. She wasn’t going to take this home. She sees herself as a guardian and protector. It should be acknowledged.”

Kellar is currently being held in jail in Santa Clara County on two counts of attempted child molestation and two counts of solicitation of a sex crime. Burnworth is in Pierce County jail in Washington where she faces charges of sexual exploitation of a minor, rape of a child and dealing in depictions of a minor engaged in sexually explicit conduct.