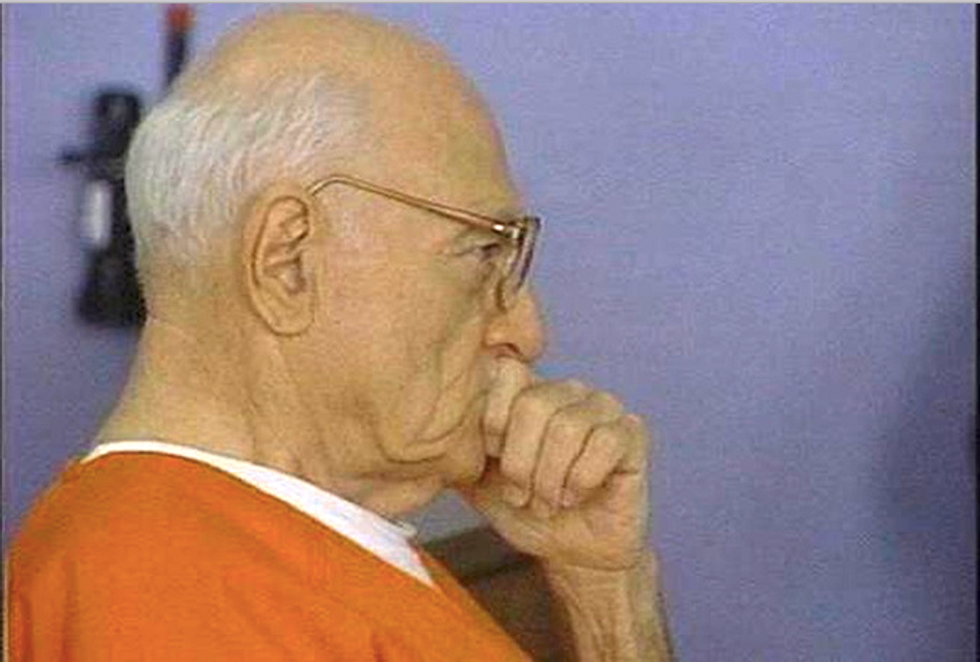 The granddaughter of notorious white supremacist and kidnapper Gordon Winrod sent out an urgent message on Tuesday that Winrod is "setting up shop" in an old school building in Kulm, ND.

WDAY radio host Mike McFeely said that Shannon Maresh posted a warning on Facebook that Winrod -- who kidnapped six of his grandchildren from their North Dakota homes 20 years ago -- is starting a "cult" in a property purchased for him by family members.

Maresh told radio host McFeely, “I want people in the community and state to know what’s happening. I don’t want what happened to my family to happen to other families. I want to prevent that from happening to anybody else.”

Winrod was convicted of kidnapping his grandchildren in order to indoctrinate them into his extreme racist beliefs. He served 10 years of a 30-year sentence behind bars and was released in May of 2012.

He is currently living with his daughter and son-in-law Laura and Sam Leppert in rural Kulm.

The Ozark County Times said, "Winrod was pastor of Our Savior's Church and had been linked to the Christian Identity Movement. For years he published 'The Winrod Letter' a newsletter that was chock full of anti-Jewish rhetoric. Winrod claimed law enforcement, government and most business leaders were Jews, and he often referred to the court system as the 'Jewdiciary.'"

Winrod abducted the six grandchildren from their homes in 1994 and 1995. Authorities raided his Ozark County, MO compound in May of 2000 and were able to talk the children -- then ages 9 to 16 -- into surrendering and emerging from the bunker into which they'd locked themselves.

In her message, Maresh wrote:

"Edgeley and surrounding area friends: I’m not sure if you remember the years of my life where my parents were afraid to leave me alone for fear I would disappear. You may have even been concerned about your own children. This fear even extended to the school. My siblings and cousins disappeared and I quickly became an only child. My family was shattered. The man responsible was Gordon Winrod. He and his followers have one creed: to hate everyone who doesn’t believe as they do and follow Gordon Winrod’s teachings. We, you…us? We are all ‘blood sucking Jews,’ whatever that means. The point is, he and his followers fully believe that if you aren’t one of them it is not wrong to steal, cheat, lie, or kill you. Well, he is back. He was released from jail after being convicted of kidnapping and brainwashing. He is now setting up shop in the old Kulm school. Hide your kids. Hide your wives. And whatever you do, don’t drink the Cool Aid. Seriously though. This man is a predator and his followers are dangerous.”