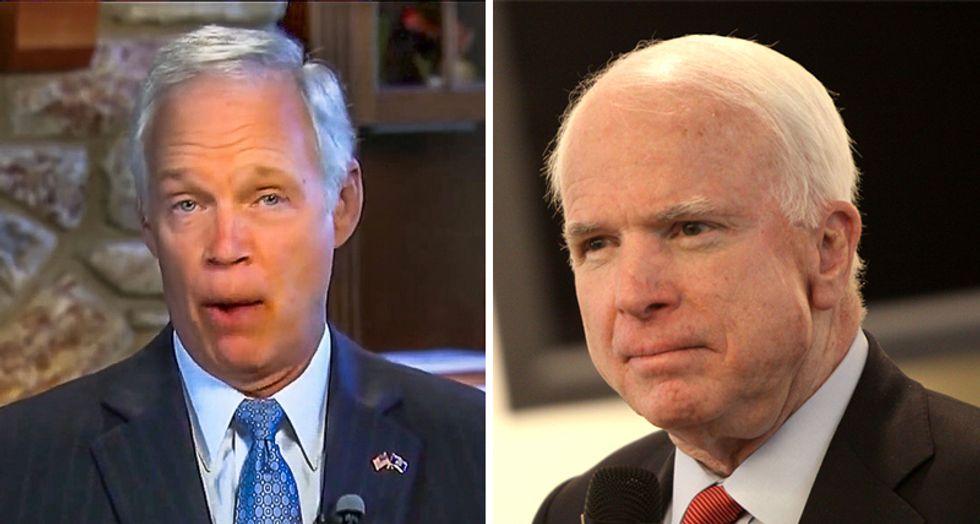 "We did get a call from Paul (Ryan) and he assured us that skinny repeal was not going to pass the House it would have to go to conference," Johnson said during a Tuesday radio interview on AM560 "Chicago's Morning Answer."

"Again, I'm not gonna speak for John McCain -- he has a brain tumor right now -- that vote occurred at 1:30 in the morning, some of that might have factored in," he went on.

The host then asked if he "really" thought that McCain's brain tumor caused McCain to not support the Trump bill and Johnson seemed to stammer in his response.

"Again, I-I-I don't know exactly what -- we really thought -- and again I don't want speak for any senator," he claimed. "I really thought John was going to vote yes to send that to conference at 10:30 at night. By about 1, 1:30, he voted no. So you have talk to John in terms what was on his mind."

According to CNN, McCain's spokesperson Julie Tarallo called the statement "bizarre" and "deeply unfortunate that Senator Johnson would question the judgment of a colleague and friend. Senator McCain has been very open and clear about the reasons for his vote."

The internet was not as kind. Here are the most brutal tweets blasting Johnson below:

@devilradio If Ron Johnson can blame McCain's ACA vote on a brain tumor, then we can blame Johnson's votes on him being a dolt.
— Robert Barhite (@Robert Barhite) 1502299873.0

@SenRonJohnson Your statement regarding Sen. McCain's vote being affected by his brain tumor was appalling. Shame on you.
— Steve Coulter (@Steve Coulter) 1502299162.0

I am SURE Johnson meant it made McCain empathetic to what other Americans with cancer go through, right? RIGHT? (W… https://t.co/uEKLlYAo1k
— Country over party (@Country over party) 1502299845.0

Beyond being unseemly, whats weird abt this is Ron Johnson was himself making a dramatic show about angst w/ process https://t.co/98uOPQDV3b
— Sam Stein (@Sam Stein) 1502294385.0

@CNN What an ass! McCain grew a conscience-something most @GOP members do not have! Blame on his brain tumor all you want-he was right!
— JGentry (@JGentry) 1502301336.0