Illinois town gears up to become heart of US eclipse 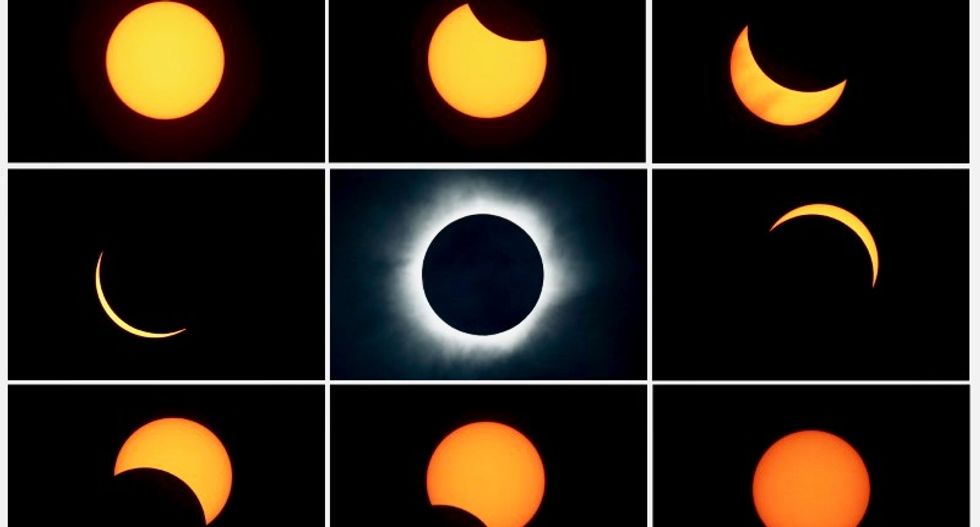 FILE PHOTO - A combination photograph shows the beginning (top L) to the end (top L to bottom R) of a total solar eclipse as seen from the beach of Ternate island, Indonesia, March 9, 2016. REUTERS/Beawiharta

The small southern Illinois town of Carbondale was revving up on Sunday to become eclipse central on the eve of a total solar eclipse that will traverse the continental United States for the first time in 99 years.

Carbondale is a few miles north of the point of greatest duration of the celestial event and will have a total eclipse for two minutes and 38 seconds on Monday.

Many residents of Carbondale, a town of 26,000 people 70 miles (112 km) southeast of St. Louis, have been capitalizing on the celestial blackout, from renting out their homes to creating eclipse-themed merchandise.

Artist Matt Sronkoski has been selling hand-painted eclipse T-shirts for months and said he had created hundreds of individual designs. His shirts are so popular he has been selling them overseas, from “England to the South China Sea,” he said.

“I am very proud of that,” the Carbondale native said.

The eclipse starts its cross-country trek over the Pacific coast of Oregon in late morning and reaches South Carolina's Atlantic shore 90 minutes later. The sight of the moon's shadow passing directly in front of the sun could draw the biggest live audience of a celestial event in human history.

The campus of Southern Illinois University has been transformed into an eclipse-themed entertainment center. It includes an arts and crafts fair, a carnival and a science fair, with the U.S. space agency stationed outside the school's Saluki Stadium to broadcast live during the event.

The eclipse events at Saluki Stadium are expected to be attended by 14,000 people, with tickets costing $25.

Many visitors said they had trouble finding lodging, with hotels booked up months in advance and Carbondale residents charging hundreds of dollars a night for available rooms at short-term rentals websites such as AirBnB.

Isela Arellano, who is visiting from Chicago with her children and husband, said they ended up staying in Troy, Illinois, a two-hour drive from Carbondale.

"It was most definitely quite difficult. We looked at AirBnB, but the prices were just outrageous," she said.

In Shawnee National Forest, more than 40 miles (64 km) southeast of Carbondale, officials temporarily closed access on Sunday to three areas where visitors clogged roads with parked cars, according to the park's Facebook page.