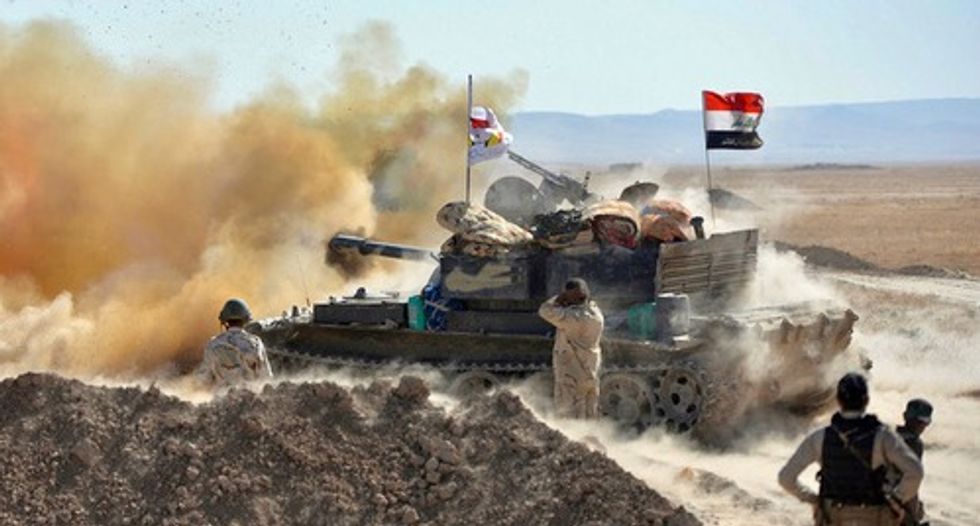 Government forces breached the city limits of Tal Afar in northwestern Iraq on Tuesday on the third day of a U.S.-backed offensive to seize it back from Islamic State militants.

Tal Afar, a longtime Islamic State stronghold, is the latest objective in the war following the recapture of Mosul after a nine-month campaign that left much of that city in ruins.

U.S. Defense Secretary Jim Mattis, speaking just before arriving in Iraq on Tuesday, said the fight against IS was far from over despite recent successes by the Western-backed government. The Sunni Muslim jihadists remain in control of territory in western Iraq and eastern Syria.

On Tuesday, however, army and counter-terrorism units broke into Tal Afar from the eastern and southern sides, the Iraqi joint operations command said.

About three quarters of the city remain under militant control, including the Ottoman-era citadel in its center, according to an operational map published by the Iraqi military.

The main forces involved are the Iraqi army, air force, Federal Police, the U.S.-trained Counter Terrorism Service (CTS), as well as units from the Shi'ite Popular Mobilization Forces (PMF), who began encircling the city on Sunday.

Located 80 km (50 miles) west of Mosul, Tal Afar is strategic as it lies along the supply route between Mosul and Syria. It has produced some of IS's most senior commanders and was cut off from the rest of IS-held territory in June.

Up to 2,000 battle-hardened militants remain in Tal Afar, according to U.S. and Iraqi military commanders.

"ISIS' days are certainly numbered, but it is not over yet and it is not going to be over anytime soon," Mattis told reporters in Amman.

As was the case with the battle for Mosul, aid organizations groups are concerned about the plight of civilians in Tal Afar.

U.S. Brigadier General Andrew Croft, chief of coalition air operations over Iraq, said between 10,000 and 20,000 civilians remained in Tal Afar. Up to 20,000 are thought to remain in the surrounding areas, but aid agencies say these are just estimates as they have been without access to Tal Afar since 2014.

Waves of civilians have fled the city and villages under cover of darkness over the past few weeks. Those remaining are threatened with death by the militants, who have held a tight grip there since 2014. About 30,000 have fled Tal Afar since April, according to the United Nations.

In Geneva, the U.N. refugee agency UNHCR said those fleeing this week were suffering from dehydration and exhaustion, having lived off unclean water and bread for the past three to four months.

"Many talk of seeing dead bodies along the way, and there are reports that some were killed by extremist groups," UNHCR spokesman Andrej Mahecic said. "Others appear to have died due to dehydration or illnesses."

People were also arriving at camps with wounds from sniper fire and exploding mines, he said.

Several thousand civilians are believed to have been killed in the battle for Mosul, where Islamic State tried to keep them in areas it controlled to act as human shields against air strikes and artillery bombardments.

Defense Secretary Mattis met Iraqi Prime Minister Haider al-Abadi and Defence Minister Arfan al-Hayali in Baghdad to discuss the role of U.S. forces in Iraq after the recapture of the remaining cities under Islamic State.

''There are plans under consideration... that will look at residual presence in the future," Lt. General Steve Townsend, the U.S.-led coalition's commanding general, told reporters in a joint press briefing with Mattis.

Croft said that over the past two or three months, he had seen a fracturing in the Islamic State leadership.

"It just seems less coordinated. It appears more fractured, less robust, and sort of flimsy, is the word I would use... it is sporadic," Croft told reporters.

Islamic State leaders fled Mosul during the fighting there and the whereabouts of its chief, Abu Bakr al-Baghdadi, are unknown. Unconfirmed reports in the past few months have said he is dead.

U.S. officials said that while big cities like Mosul have largely been cleared of Islamic State militants, there were concerns about the ability of Iraqi forces to hold territory.

Islamic State is also on the back foot in Syria, where Kurdish and Arab militias backed by the U.S.-led coalition have captured swathes of its territory in the north and are assaulting its main Syrian stronghold of Raqqa.

McGurk said about 2,000 Islamic State fighters remained in Raqqa and as much as 60 percent of the city had been retaken.

The jihadist group is now falling back deeper into the Euphrates valley region of eastern Syria.

Mattis said the next step for forces fighting Islamic State in Syria would be a move against the middle Euphrates valley, a reference to the militants' stronghold in Deir al-Zor province southeast of Raqqa.

A U.S. official also said Mattis would press Massoud Barzani, president of the autonomous Kurdistan Regional Government, to call off a planned referendum on independence.

Iraq's Kurds have said they will hold the referendum on Sept. 25 despite concerns from Iraq's neighbors who have Kurdish minorities within their borders and a U.S. request to postpone it.

However, a senior Kurdish official said the Kurds may consider the possibility of a delay in return for financial and political concessions from the central government in Baghdad.

The United States and other Western nations fear the vote could ignite a new conflict with Baghdad and possibly neighboring countries, diverting attention from the ongoing war against Islamic State militants in Iraq and Syria.

For a graphic on the map of Iraq conflict, click: http://apac1.proxy.cp.extranet.thomsonreuters.biz/fingfx/gfx/rngs/1/1696/2934/MIDEAST-CRISIS-IRAQ-BLAST.jpg