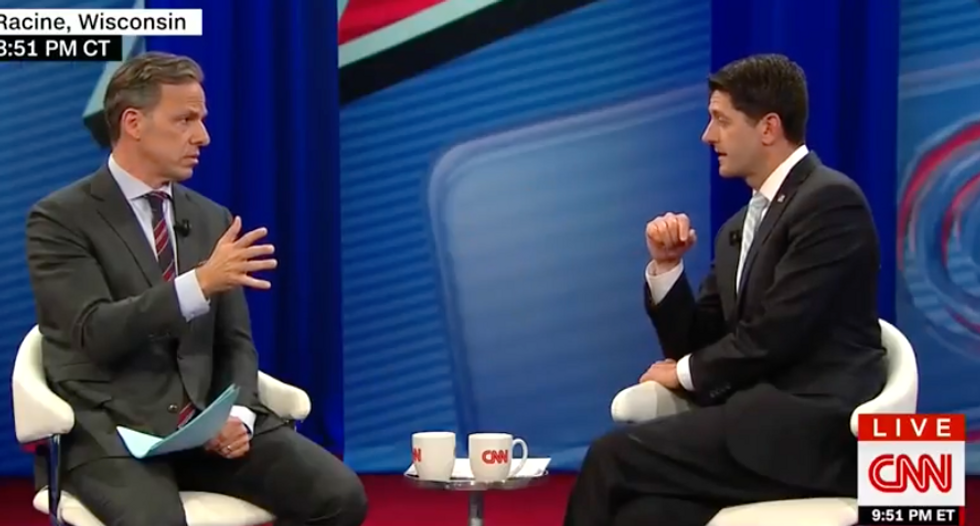 CNN’s Jake Tapper on Monday cornered Paul Ryan over Donald Trump’s sluggish repudiation of white supremacists following the neo-Nazi march in Charlottesville, Virginia, telling the speaker of the House of Representatives that the issue “wasn’t morally ambiguous, it was morally wrong.”

Ryan answered a question about the Trump’s equating of white supremacists with the anti-fascists who stood against bigotry and hate by insisting the president made a confusing statement that was “morally ambiguous.”

“I think the issue … is the reluctance to criticize President Trump for specifically saying things like, ‘Very fine people were marching in that rally’ that had swastikas and anti-Semitic chants,” Tapper pointed out during the CNN Town Hall. “There were not very fine people in that rally."

“And it wasn’t morally ambiguous, it was morally wrong,” Tapper continued.

Ryan agreed “you’re not a good person if you’re there,” before later cautioning against “partisan” attacks on Trump’s response to Charlottesville. Paul’s hedging led Tapper to lay into the president and his enablers.

“Is it not bigger than something that's partisan to say ‘people need to stand up and say more when the president does it’—forget his party for a second,” Tapper asked. “He’s giving aid and comfort to people who are fans of losing, discredited, hateful ideologies.”

“I don’t, I don't think,” an uncomfortable Ryan replied, as the audience applauded.

“The people who applauded his remarks on Tuesday were David Duke and Richard Spencer,” Tapper explained.

“He messed up on Tuesday, he was right on Monday, and he was right about an hour ago,” Ryan replied.  “When he was reading from tele-prompters, he was right?” Tapper shot back.

Tapper on Trump's Charlottesville remarks: It wasn’t morally ambiguous, it was morally wrong