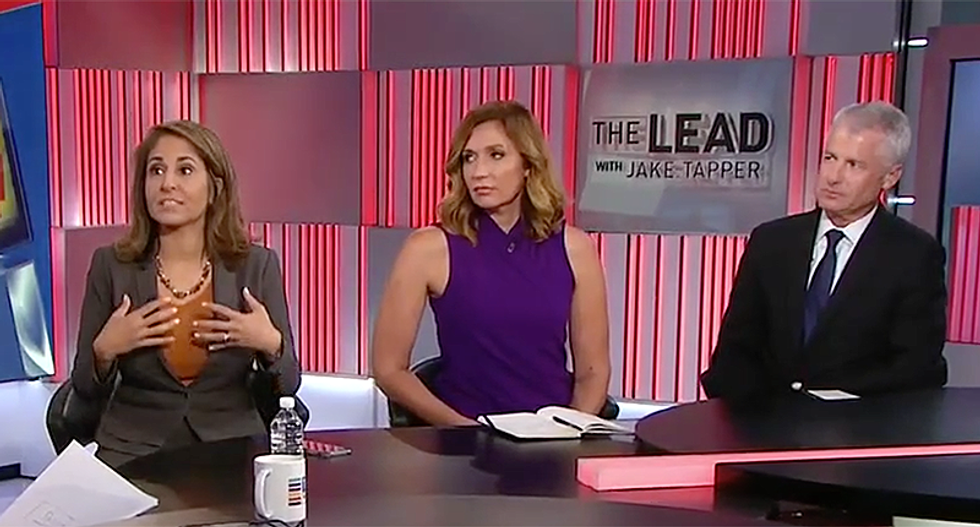 While the move by Putin came at the end of July, reporters asked Trump about it while he was speaking to the press. His response was to celebrate the move by Putin and claim that it was saving him from having to fire people. The staffers are still employed by the State Department.

"First of all, it's not going to help cut payroll at all. That's just not how government budgets work," said host Jake Tapper. "Beyond that, what Putin did was an anti-American action. Period. That's all it was. That's the definition of an anti-American action, and there President Trump is thanking him for carrying it out."

"The Center for American Progress' Neera Tanden agreed, reminding viewers that Putin's actions were taken in response to the sanctions imposed by the United States for the 2016 involvement in the election.

"It is a bizarre act for the American president to take the side of a foreign government against our own State Department personnel being expelled," she said.

"When we first heard that he had said this I think we all thought to ourselves, 'maybe he was joking, he was trying to be funny,' but there wasn't any obvious attempt at humor there," Tapper continued.

"No, it looked like he was being fairly serious," Carpenter noted. "Does he believe his own spin? I'm not sure, but that is the answer that he gave when asked about Americans leaving the country. I think the next time he should probably roll over and ask Putin to scratch his belly. This is an act of submission. There's no win for America. We don't have staff on the ground in a very important country for geopolitical reasons but because they meddled in our election and there's investigations going on. I can't accept that as an excuse and other people should press him for a better answer.

Just 'roll over and ask Putin to scratch his... by sarahburris