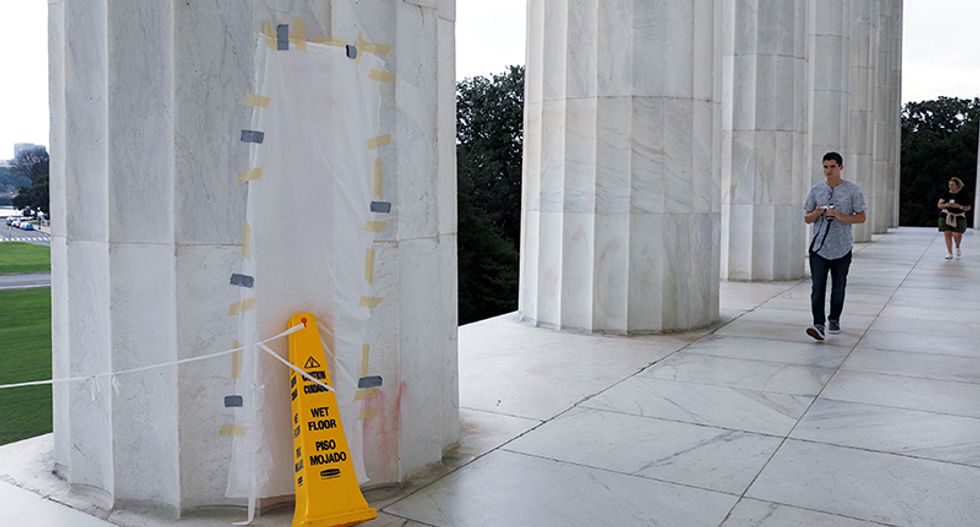 Tourists walks past a papered-over column where a vandal scrawled obscene graffiti in spray paint on the Lincoln Memorial in Washington, U.S. August 15, 2017. REUTERS/Jonathan Ernst

The Lincoln Memorial in the U.S. capital was spray painted with expletive graffiti that was discovered on Tuesday, days after violence broke out in Charlottesville, Virginia, over an American Civil War-era monument.

The graffiti appeared to read "fuck law" spray painted in red on a column of the memorial to Abraham Lincoln, the American president who signed the Emancipation Proclamation freeing slaves in the United States.

The National Park Service said in a statement that it was removing the graffiti from the monument and a Smithsonian Institution directional sign blocks away that was also vandalized with spray paint.

The U.S. Park Police said in the statement that they were investigating.

The graffiti marks the second time this year that the Lincoln Memorial, one of Washington, D.C.'s major tourist attractions, was defaced. In February, the monument to Lincoln, the Washington Monument and the World War II Memorial, were vandalized with a marker pen.

The Park Service said that a monument preservation crew was removing the graffiti at the Lincoln Memorial on Tuesday using a mild paint stripper.

A Park Service photo showed the graffiti on a column of the memorial, and Twitter erupted with opinions on whether it said "law" or "Islam."

"Could the person who defaced the Lincoln Memorial please come back and write more clearly so we know who to be mad at," comedy writer Chase Mitchell wrote on Twitter.

Lincoln was president during the 1861-65 Civil War, and the vandalism was found days after deadly weekend violence at a far-right rally at a statue of Confederate General Robert E. Lee in Charlottesville, Virginia.

The unrest has intensified a national debate over whether monuments to the pro-slavery Confederacy are symbols of heritage or hate.