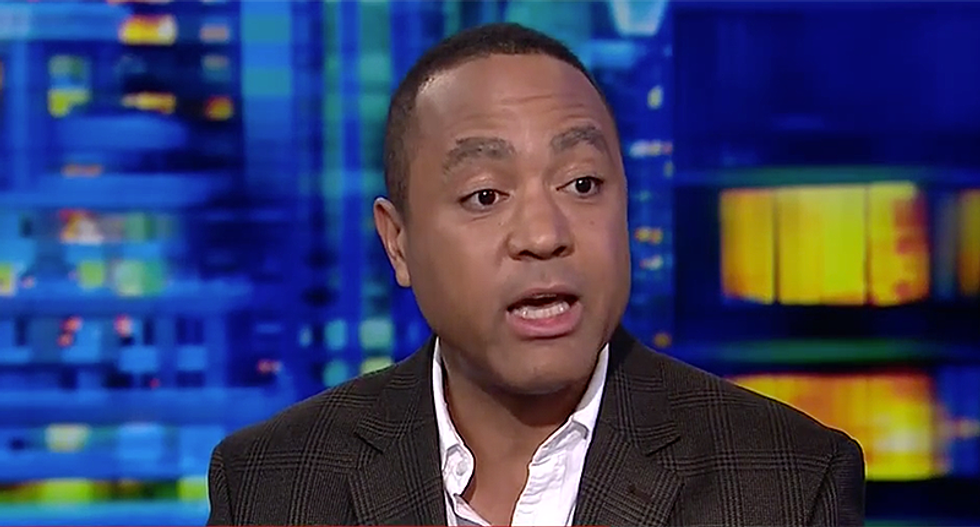 While Trump might claim to have "all the best words," McWhorter had another take.

"What we're dealing with is something we've talked about before," McWhorter began. "The way to understand the man is to the understand him as a gum-popping 12-year-old. Not even 14. Twelve. that's how much context he has. He understands racism is bad. A 12-year-old understands that, but he also doesn't like this thing he's calling the alt-left because they don't like him. So, when he thinks about the people that are really egregious, he thinks 'Well, people who are racist and want to hurt people, of course that's not good,' just like I shouldn't punch one of my friends. But on the other hand he doesn't like the left because they don't like him and he finds them shrill. So, it has to be both sides."

He went on to say that people expect him as an expert on linguistics to confirm that Trump is a racist and is "dog whistling" to the Nazis and white supremacists, but he refuses to think Trump is smart enough. He thinks that Trump is honestly only mean to them because he feels like they are mean to him.

"I think that it gives him more credit as a thinking being than is necessary," he said.

He harkened back to Steve Bannon, who has likely "told him to watch out," so Trump thinks it is his job not to step on "those people."

Lemon wondered how there could be such a history with the birtherism and the Central Park Five case, but McWhorter said that the Trump is far too "ordinary" for that to be the case. Realistically, he has "reconstructed primitive views and he doesn't even bother to hide."

"I think what this is all about is he doesn't like the idea that some people keep dwelling on the past," he continued. "Once again, that bar stool, unsophisticated person. Let the past go. He doesn't understand how the past extends into the present. He doesn't understand what an unpleasant symbol might mean because he is not a victim to one of them, being of the ethnicity that he is. And so for him, he sees that statues are pretty. And I suppose in the aesthetic sense you could say that they are. He doesn't understand that they stand for people who fought to keep black people in chains. Now, for him, of course that means let's not go back the past. But for most of us, it means a great deal more and for him, he simply doesn't understand significance."

For Trump, McWhorter said that he sees it as something that will just keep going and going. The language he's using is something that sounds like something someone would say over a beer. "When does it stop?" McWhorter called it an "ordinary thing."

"Of course, Trump doesn't understand there's a such thing as a moral trajectory that a nation makes and that this one, despite people who pretend it doesn't happen, has made quite a moral trajectory in many ways." McWhorter continued. "And yet, he's president. He is the most morally backwards president, in that sense, since Andrew Johnson, in terms of who's in the White House and who understands where the country needs to go or at least knows to pretend. So, OK, Lyndon Johnson was not Mr. Racial Sensitivity, but especially when the chips came down, he at least pretended and evolved. Trump's knuckles are dragging on the peanut shells of the floor of the tavern."

When it comes to Trump's comments about the so-called alt-left, McWhorter explained the term has been around for all of 15 minutes. To Trump, however, it basically just means someone who is mean to him. He sees the alt-right as someone who antagonizes the left, thus those who antagonize him must be the alt-left.

"He's just thinking there's an alt-right and alt means annoying," he continued. "So, alt-left is annoying left, because the left annoys him because he doesn't like them. He's the sloppiest public speaker in the history of homo sapiens. The idea that these alt-lefties trying to resist, even with their bodies, what these alt-right thugs were doing -- the idea that he doesn't see the difference is really rather tragic. He simply doesn't think that the black thing or the Jewish thing is important at all. And that's fine. Neither does Archie Bunker, neither does the crazy uncle. But this is the president. This is the sad thing, Don."

Listen to the full gut-punching interview below:

'Trump's knuckles are dragging on the peanut... by sarahburris