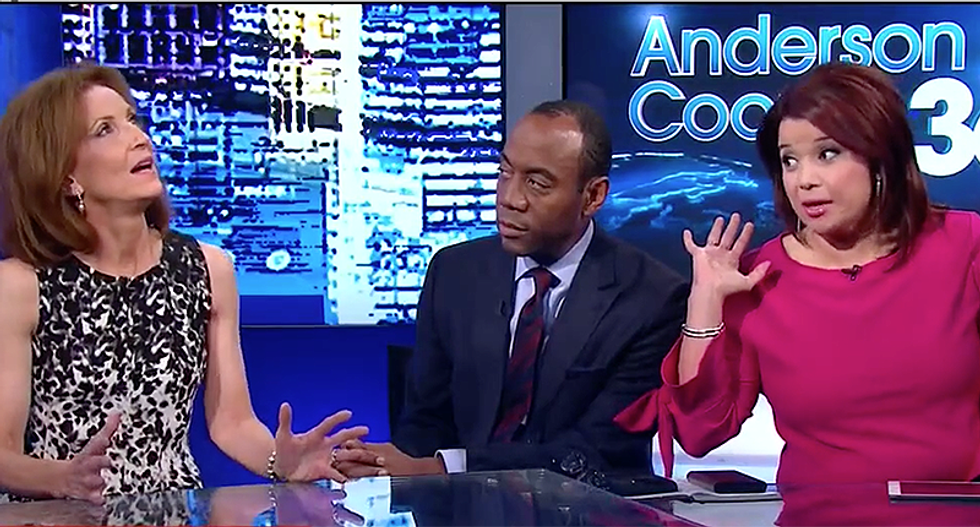 "I'm going to need asterisk from the Trump supporters who let me know when I should take stuff literally, interpret it like abstract art or figuratively and as a joke," Navarro said, after Hayworth said Trump wasn't being serious about Putin. "When it's made-up words."

"It's not hard to figure out," Hayworth spoke over Navarro.

CNN host Anderson Cooper cut in to explain that what Gen. James Mattis said is an attack on U.S. allies or the U.S. itself, while Trump called them threats. "They've been making all these threats and they can't make any more," Cooper cited.

"I think we can draw a rhetorical continuum," Hayworth explained, which Navarro was quick to mock.

"A rhetorical continuum? Am I the only one that finds that really funny?" she asked her fellow panelists.

Hayworth explained that Trump is speaking to the American people just as Kim Jong-Un is speaking to his people. Cooper was so shocked by the comparison between the two leaders he took his glasses off.

"My God!" Navarro exclaimed. "I would hope the American people hold the president of the United States to a higher standard than a dictator in North Korea who is insane!"

"Wait!" Cooper cut in. "The North Koreans have announced that Kim Jong-Un has a perfect golf game. He was born on a mountaintop. So, they lie to the people."

Hayworth clarified that he is a dictator and an evil one at that, however, Cooper highlighted the way that he communicates to his people. Hayworth then highlighted British Prime Minister Theresa May similarly communicates to her people. That's when legal expert Jeffrey Toobin cut in to note that the British people have never celebrated May as someone who has shot 18 holes-in-one in a single golf game.

Watch the bizarre conversation with the panelists below:

Ana Navarro loses it when former GOP Rep... by sarahburris