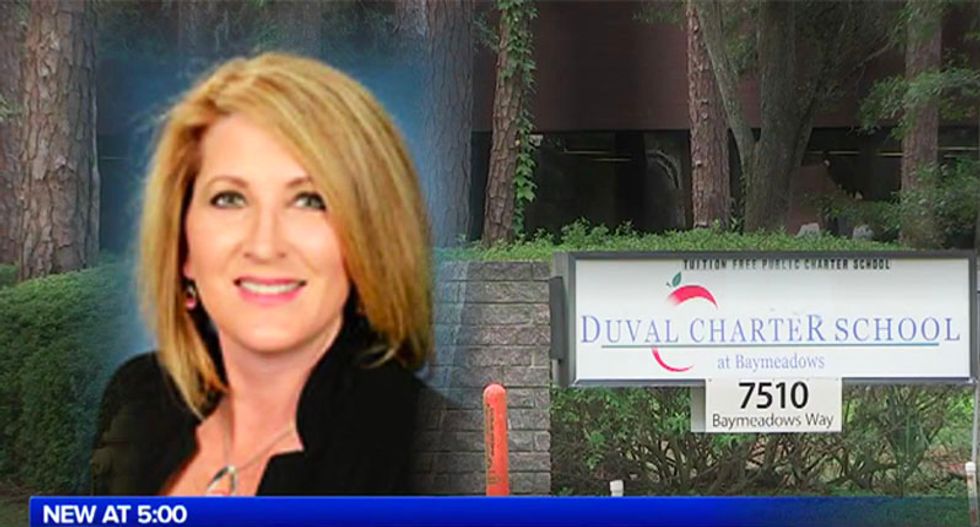 A Florida charter school principal is under fire after parents of students at her school discovered posts on her Facebook page praising lynching accompanied by memes attacking Black Lives Matter.

According to WJAX, principal Kimberly Stidham of Duval Charter School at Baymeadows is under fire for the posts which some parents are calling racist.

While Stidham has been re-posting anti-black memes on her page for months, a recent post containing lyrics for the Toby Keith song "Beer for My Horses," resulted in complaints about what many believe is veiled racism.

"Take all of the rope in Texas, find a tall Oak tree, round up all of them bad boys, hang them high in the street for all the people to see," the song's lyrics read.

The lyrics continue, "We got too many gangsters doing dirty deeds. Too much corruption, and crime in the streets. It's time the long arm of the law put a few more in the ground, send 'em all to their maker and he'll settle 'em down."

Combined with memes that attack African-Americans, one parent criticized the school administrator.

“She’s a principal, she should know better and she should do better," said one mother who asked to remain anonymous over concerns for her child's welfare. "I’m speaking out, because I'm hoping to bring awareness to other parents. Not just minority parents, but parents who have their child there in general."

According the principal, she is appalled that anyone might think she is a racist, but thanked concern parents for the feedback saying she would take their concerns under consideration in the future.

“I am absolutely devastated that my personal political views were perceived to be racist in any way. I am a firm believer in equality, justice and respect for all individuals and I recognize now that some of my posts could have been misunderstood. I appreciate the fact that those who were offended brought this to my attention so that I could rectify the situation. I encourage anyone who has any concerns about this to come to me directly so that we can discuss it further.” Stidham wrote.

According to a spokesperson for the school, "While we are not at liberty to discuss any specific personnel matters, we can say that we conduct a thorough investigation and take all appropriate actions.”

Watch the video below via WJAX: