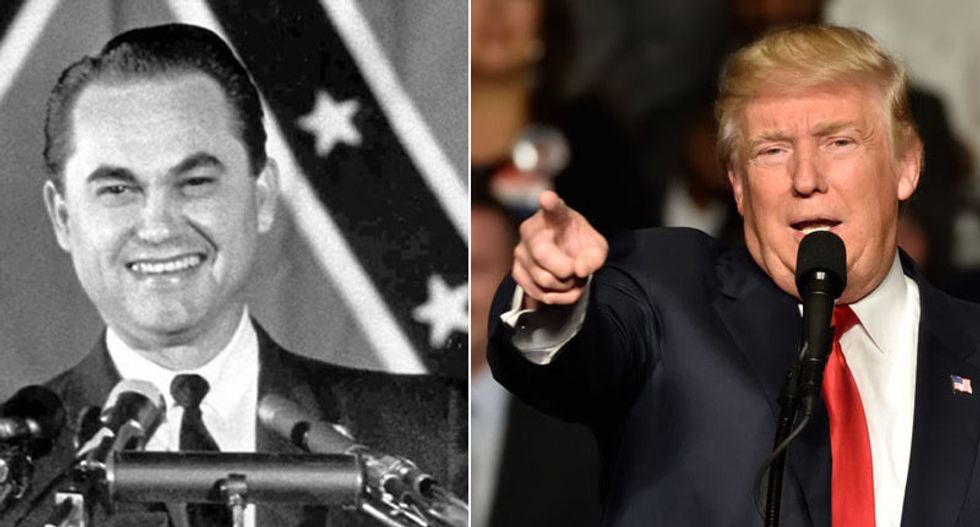 In a scathing opinion piece published in the Washington Post, former Missouri Senator John Danforth (R) compared President Donald Trump to the notoriously racist Alabama Governor George Wallace before calling him "the most divisive president in our history."

Danforth, who served in the Senate for almost twenty years, criticized the president for not only harming the Republican party, but for also damaging the country.

"Trump is not the first to promote self above party," Danforth wrote. "The fundamental reason Trump isn’t a Republican is far bigger than words or policies. He stands in opposition to the founding principle of our party — that of a united country."

"The Republican Party has a long history of standing for a united country," he continued. "Our record hasn’t been perfect. When we have pushed the agenda of the Christian right, we have seemed to exclude people who don’t share our religious beliefs. We have seemed unfriendly to gay Americans. But our long history has been to uphold the dignity of all of God’s people and to build a country welcoming to all."

"Now comes Trump, who is exactly what Republicans are not, who is exactly what we have opposed in our 160-year history. We are the party of the Union, and he is the most divisive president in our history. There hasn’t been a more divisive person in national politics since George Wallace," he wrote, invoking the Alabama governor who declared at his 1963 inauguration, "In the name of the greatest people that have ever trod this earth, I draw the line in the dust and toss the gauntlet before the feet of tyranny, and I say segregation now, segregation tomorrow, segregation forever."

Danforth went on to write, "It isn’t a matter of occasional asides, or indiscreet slips of the tongue uttered at unguarded moments. Trump is always eager to tell people that they don’t belong here, whether it’s Mexicans, Muslims, transgender people or another group. His message is, 'You are not one of us, the opposite of 'e pluribus unum.' And when he has the opportunity to unite Americans, to inspire us, to call out the most hateful among us, the KKK and the neo-Nazis, he refuses."

The former senator concluded by imploring fellow Republicans to turn their backs on Trump.

"In honor of our past and in belief in our future, for the sake of our party and our nation, we Republicans must disassociate ourselves from Trump by expressing our opposition to his divisive tactics and by clearly and strongly insisting that he does not represent what it means to be a Republican," he concluded.

You can read the entire devastating piece here.