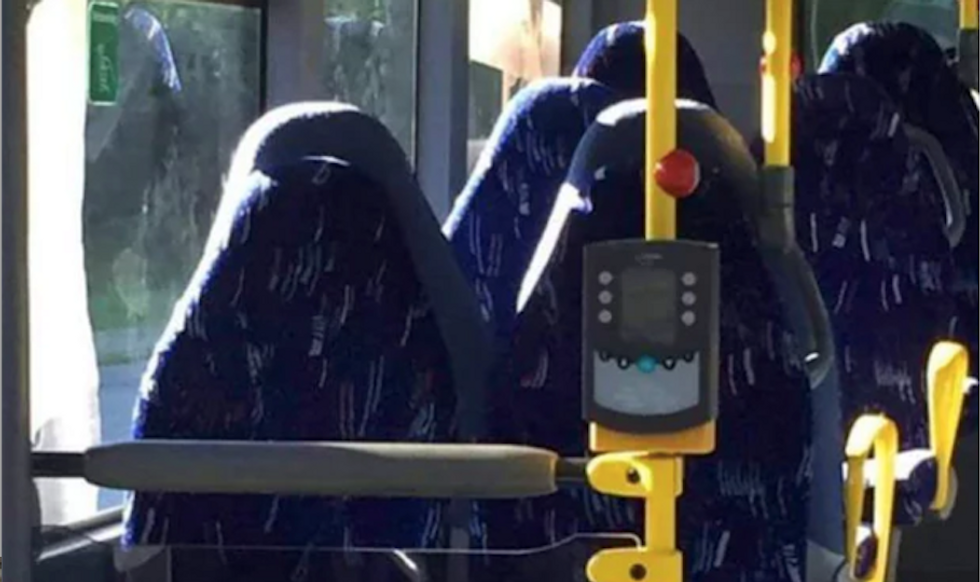 Bus seats in a Norwegian photo that spawned a right wing meltdown (Facebook.com)

An anti-Islamic, right-wing group from Norway sounded an urgent red alert about busloads of women in Burqas being brought into their country and provided a photo as proof -- only to become a global laughingstock when the "terrifying" Islamic women proved to be six empty bus seats.

The Guardian said that the Norwegian group Fedrelandet viktigst -- "Fatherland First" -- posted the photo on its Facebook page, calling it "tragic and terrifying."

“This looks really scary,” wrote one of Fatherland First's 13,000 members. “Should be banned. You can’t tell who’s underneath. Could be terrorists.”

Commenters speculated that the mystery women could be smuggling weapons or suicide vests under their clothes.

“Ghastly. This should never happen,” wrote another member. Other comments included: “Get them out of our country – frightening times we are living in” and “I thought it would be like this in the year 2050, but it is happening now.”

The photo was posted as a joke by journalist Johan Slåttavik, who wanted to see how fast a fake news story could spread.

“I’m shocked at how much hate and fake news is spread [on the Fedrelandet viktigst page]. So much hatred against empty bus seats certainly shows that prejudice wins out over wisdom,” wrote Norwegian journalist Sindre Beyer.