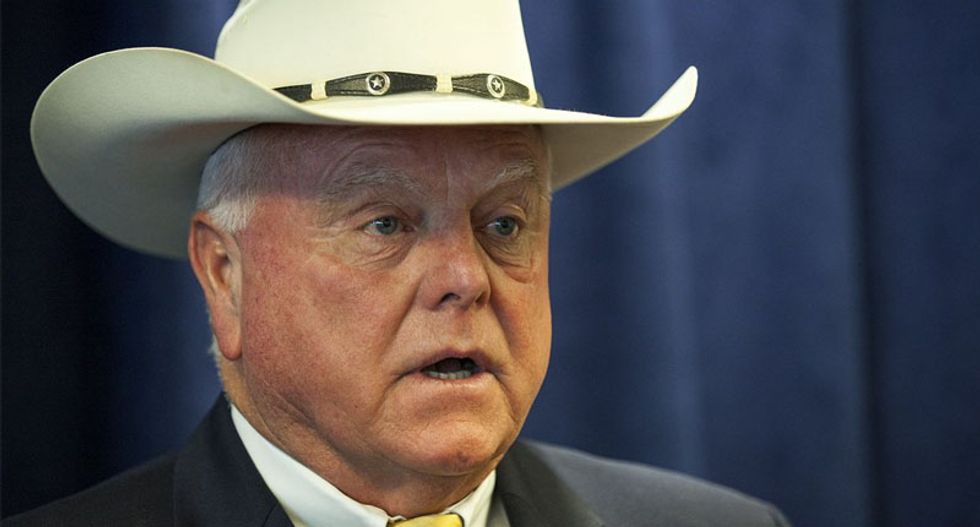 Texas Agriculture Commissioner Sid Miller — the cowboy-hat wearing Republican known for wading deep into partisan and cultural divides — is furious with the Six Flags amusement park chain, calling its decision to take down the Confederate flag and four others that had flown over the park part of a “militant, anarchist movement sweeping our country, destroying and attempting to sanitize our nation’s history.”

Miller took aim at the iconic amusement park in a lengthy statement he circulated Monday that also criticized nationwide efforts to remove larger monuments to the Confederacy in the wake of a deadly Nazi and white supremacist rally around a Robert E. Lee statue in Charlottesville, Virginia.

“The monuments honoring our southern soldiers are but a first step in a trend that very well could eventually bring down the American flag at some point if this trend is allowed to continue,” Miller said. “I was extremely disappointed to hear that Six Flags over Texas in Arlington had succumb to this scourge of race baiting, liberal activism and that the company had decided to bring down the six historic flags that flew over Texas.”

On Friday, Six Flags announced that it would only fly American flags over its parks, reversing its decades-long tradition of displaying banners of the four other nations that have governed Texas: Spain, France, Mexico and the Republic of Texas.

"We always choose to focus on celebrating the things that unite us versus those that divide us," Sharon Parker, a spokeswoman for Six Flags Entertainment Corp, said in a statement reported by several media outlets. "As such, we have changed the flag displays in our park to feature American flags.”

In his statement, Miller suggested the park was “implying that one should look upon them with shame and dismay,” and appeasing a  “band of socialistic fear mongers.”

Miller, in his first term in office, has gained notoriety for polarizing statements, often posted to social media. Those have included as a tweet that called Hillary Clinton the C-word, a Facebook post that endorsed the atomic bombing of the “Muslim world" and a Facebook post that compared refugees to rattlesnakes.

BY JIM MALEWITZ, THE TEXAS TRIBUNE