The dangerous delusions of Richard Dawkins 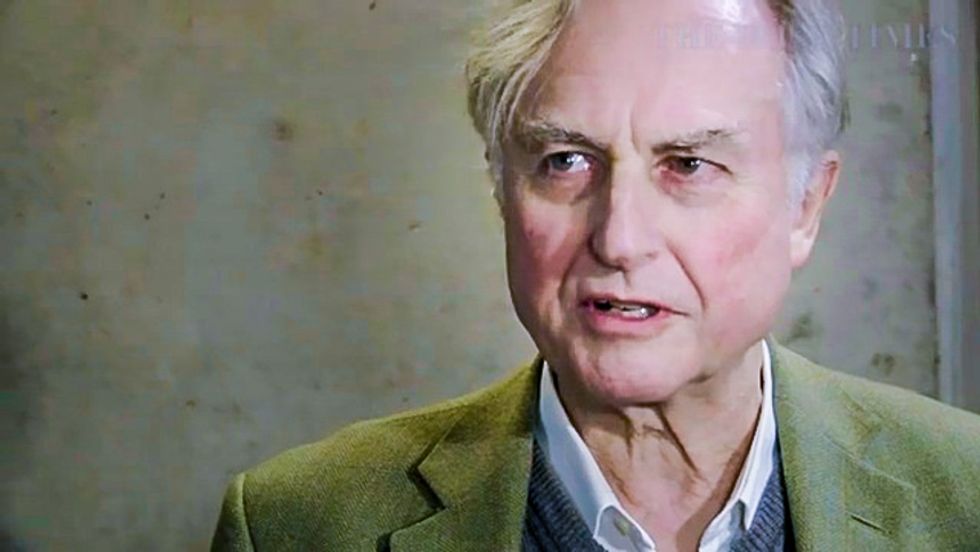 The recent cancellation of a book event with Richard Dawkins by the radio station KPFA has caused reverberations around the world. KPFA cited offensive remarks Dawkins has made about Islam. Dawkins and his followers have claimed these were taken out of context and that he’s been equally critical of Christianity. What this controversy misses, however, is the far greater destructive force of other ideas Dawkins has promulgated over decades, which have helped form the foundation of a mainstream worldview that endorses gaping wealth inequalities and encourages the wanton destruction of the natural world.

Richard Dawkins is seen as a superhero by rationalist thinkers seeking to overturn the delusions of monotheistic thought, which have wreaked havoc on the experience of billions of people over the past two millennia. In a 2013 poll, the readers of a respected British magazine, Prospect, voted him as the world’s top thinker. His bestselling popularization of evolution, The Selfish Gene, published in 1976, was recently named the most influential science book of all time in a Royal Society poll.

In fighting for science against religious superstition and climate deniers, Richard Dawkins deserves some of his popular acclaim. However, rational as they appear at first, Dawkins’ ideas are based on delusions of their own. The flaws implicit in his own belief system may be less obvious than those of monotheism, but they are at the root of much that is wrong in the current mainstream worldview. Important as it is to point out the dangerous delusions of monotheism, it is equally important not to replace one set of misconceptions with another.

In my book, The Patterning Instinct, I explored the underlying misconceptions that have led to our current crisis of civilization, and realized that Dawkins has been popularizing two of the most pernicious. One is the idea that all living organisms are controlled by selfish genes, and that humans, by implication, are innately selfish. Another is the notion that nature is nothing more than a very complicated machine. Both of these core ideas have been shown by countless scientists to be fundamentally wrong. Yet, partly because of the popularity of Dawkins’s own writing, they are widely taken on faith by the same intelligentsia that reject the fallacies of monotheism—and are used to justify some of our civilization’s most destructive behaviors.

The 'Selfish Gene' Is Bad Science and Bad Economics

Since Dawkins’s 1976 publication of The Selfish Gene, millions of people have come to understand evolution as the result of genes competing against other in a remorseless drive to replicate themselves. Ruthless competition is seen as the force that separates evolution’s winners from losers. Even altruism is interpreted as a sophisticated form of selfish behavior used by an organism to propagate its own genes more effectively. "Let us try to teach generosity and altruism," Dawkins suggests, "because we are born selfish."

It’s a harsh story, and one that has become a bedrock of modern economics, which argues that human beings are motivated by their own self-interest, and their collective self-serving actions result in the best outcome for society. This has led to a commonly accepted pseudo-scientific rationalization for laissez-faire capitalism, using the misappropriated term “survival of the fittest” to justify ruthless exploitation of the poor by wealthy corporations.

It is, however, a story that has been shown in recent decades to be erroneous at each level of its narration. Dawkins’s idea of the “selfish gene,” while still holding currency in the popular imagination, has been extensively discredited as a simplistic interpretation of evolution. In its place, biologists have developed a far more sophisticated view of evolution as a series of complex, interlocking systems, where the gene, organism, community, species, and environment all interact with each other intricately over different time frames.

Rather than a battleground of “selfish genes” competing to outperform one another, modern biologists offer a new view of nature as a web of networked systems, dynamically optimizing at different levels of evolutionary selection. Ecosystems rely for their health on the tightly synchronized interaction of many different species. Trees in a forest have been discovered to communicate with each other in a complex network that maintains their collective health—sometimes referred to as the “wood wide web.” And regarding our intrinsic human nature, a new generation of scientists has pointed to our ability to cooperate, rather than compete, as our defining characteristic.

As distinguished biologist Lynn Margulis put it, “Life did not take over the world by combat but by networking.” In direct contrast to the “selfish gene” rationalization of laissez-faire capitalism, the recognition that cooperative networking is an essential part of sustainable ecosystems can inspire new ways to structure technology and social organization for human flourishing.

The 'Nature as A Machine' Delusion

Ever since the 17th-century scientific revolution, the view of nature as a complicated machine, first proffered by Hobbes and Descartes, has spread worldwide, leading people to lose sight of it as a metaphor and wrongly believe that nature actually is a machine.

Richard Dawkins has been responsible for popularizing an updated version of this Cartesian myth, writing famously that “life is just bytes and bytes and bytes of digital information,” adding: “That is not a metaphor, it is the plain truth. It couldn't be any plainer if it were raining floppy discs.” Open any science magazine, and you’ll see genes described as programmers that “code” for certain traits, while the mind is discussed as “software” for the “hardware” of the body that is “wired” in certain ways. Thanks to Dawkins and his followers, this deluded view of nature as a machine has become ubiquitous, creating the moral sanction for corporations to treat the earth as a resource to plunder, beguiling techno-visionaries to seek immortality by downloading their minds, and inspiring technocrats to argue for solving climate change through geoengineering.

Biologists, however, identify principles intrinsic to life that categorically differentiate it from even the most complicated machine. Living organisms cannot be split, like a computer, between hardware and software. A neuron’s biophysical makeup is intrinsically linked to its computations: the information doesn’t exist separately from its material construction.

In recent decades, systems thinkers have transformed our understanding of life, showing it to be a self-organized, self-regenerating complex that extends like a fractal at ever-increasing scale, from a single cell to the global system of life on Earth. Everything in the natural world is dynamic rather than static, and biological phenomena can’t be predicted with precision.

This new conception of life leads us to recognize the intrinsic interdependency of all living systems, including humans. It offers us the underpinnings for a sustainable future where technology is used, not to ransack nature or re-engineer it, but to harmonize with it and thus make life more meaningful and enhance flourishing.

The Reductionist Myth and the False Choice It Offers Us

Richard Dawkins and his followers have been responsible for foisting a cruel myth on thinking people around the world: that if they reject the illusions of monotheism, their only serious alternative is to believe in a world that is harsh, selfish, and ultimately without meaning. Their ideas arise from a particular form of scientific thought known as reductionism, which holds that every aspect of our world, no matter how awe-inspiring, is “nothing but” the mechanical motion of particles acting predictably on each other.

In fact, recent findings in complexity theory and systems biology point the way to a new conception of a connected universe that is both scientifically rigorous and deeply meaningful. In this understanding, the connections between things are frequently more important than the things themselves. By emphasizing the underlying principles that apply to all living things, this understanding helps us realize our intrinsic interdependence with all of nature, and offers a philosophical basis for a future of sustainable flourishing. Rather than driven by selfish genes in an endless struggle, we are in fact part of a web of meaning linking humanity with the natural world.

The damage that Richard Dawkins has caused our global society goes far deeper than any hurtful comments he has made about Islam. As we face the gaping inequalities caused by uncontrolled capitalism, along with the looming threat of catastrophic climate change and other impending global crises, we must recognize the role that Dawkins’ ideas have played in forming the philosophical foundations of our unsustainable worldview.

Ultimately, the crucial issue is not about cancelling his appearance on a radio show but recognizing that, just as religion has caused millennia of suffering based on delusional ideas, Dawkins himself has created a new delusional framework offering a false rationale for an economic and technocratic system destroying human and natural flourishing. The choice is not between religion and science, as Dawkins and his followers suggest. The real choice is between a flawed worldview that leads inexorably to globally destructive behavior and one that recognizes life’s deep interconnectedness and humanity’s intrinsic responsibility within it.

Jeremy Lent is the author of The Patterning Instinct: A Cultural History of Humanity’s Search for Meaning (Prometheus Books).