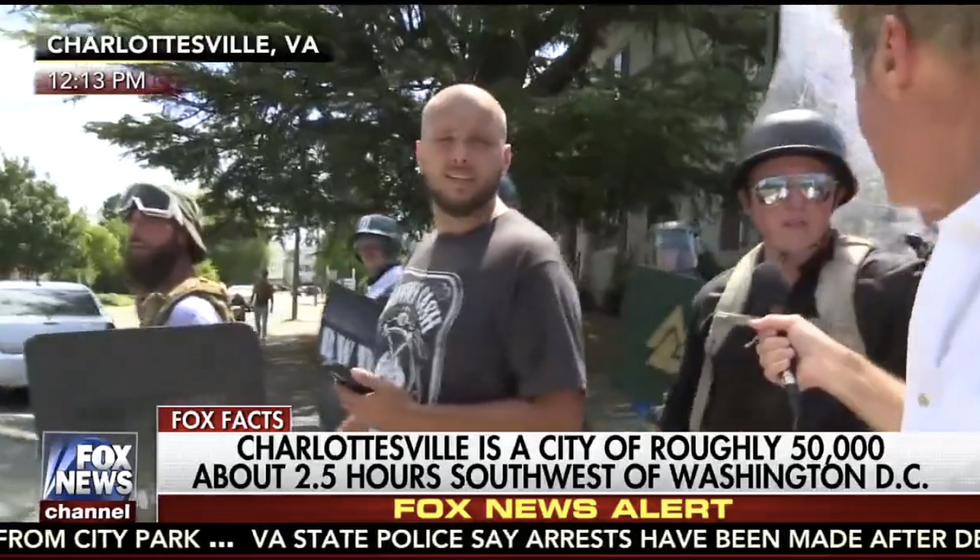 Fox News reporter Doug McKelway got more than he bargained for on Saturday when he attempted to interview a group of pro-Nazi marchers at the "Unite the Right" protest in Charlottesville, VA.

McKelway seemed shocked that the right-wing marchers who showed up in vintage Nazi helmets, armed with brass knuckles and carrying shields weren't interested in having an intellectual conversation about the role of Confederate Gen. Robert E. Lee in U.S. history.

"They're just angry," he said, "and demonstrating it here. Let's see if we can talk to some of these guys."

He approached a group of helmeted, shield-carrying men and asked where they were headed.

"They're gassing us!" said another in reference to police tear gas being used to disperse the protesters. "The f*cking Jew-lovers are gassing us!"

"Pardon his French," said McKelway, excusing the "F-word," but making no comment on whether or not the Virginia State Police are "Jew-lovers."

One person died at Saturday's protest after a car rammed a crowd of demonstrators. The Associated Press said at least 19 others were hurt.