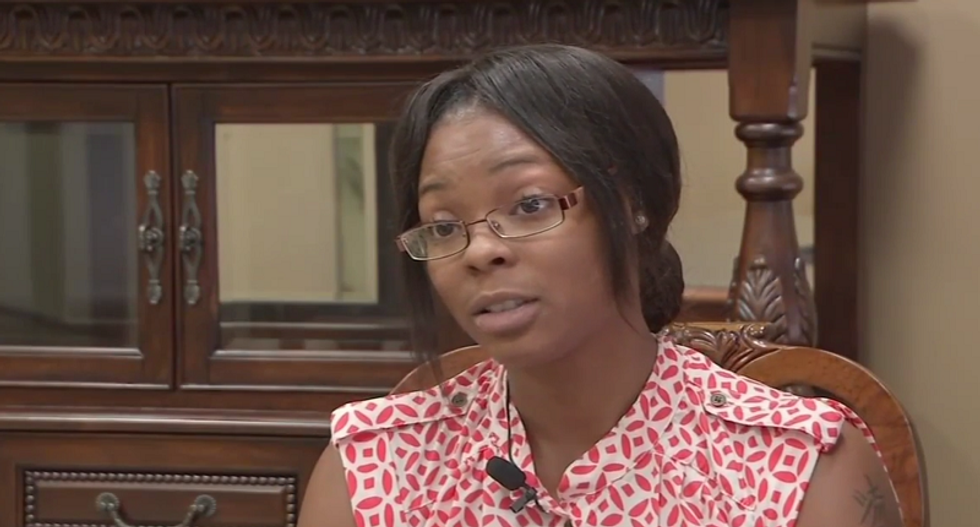 The attorney for a black Texas woman released dashcam video from a 2015 arrest that he says demonstrates that then-20-year-old Charnesia Corley was sexually assaulted by officers after they pulled her over for a routine traffic offense.

The Guardian reported Wednesday that Sam Cammack said, "When you stick your fingers in somebody without their effective consent, that’s rape in any state that I know of."

Corley was pulled over by Harris County police in Houston on June 21, 2015 for allegedly running a stop sign and failing to use turn signals. She was subjected to a humiliating 11-minute vaginal search performed roadside with the aid of a flashlight.

Cammack called it "rape by cop" and is calling for an independent prosecutor after a grand jury found Harris County Sheriff's Deputies Ronaldine Pierre and William Strong not guilty of official oppression.

The incident took place in the parking lot of a Texaco gas station. In a federal suit against Harris County, Cammack wrote, "When one of the Deputies tried to insert her fingers into Ms Corley’s vagina, Ms Corley protested. At that point, the Deputies forcibly threw Ms Corley to the ground, while she was still handcuffed, pinned her down with her legs spread apart, threatened to break her legs and without consent penetrated her vagina in a purported search for marijuana.”

Corley was arrested and charged with resisting arrest and possession of .02 ounces of marijuana. Those charges were later dropped.

The case has ignited a firestorm of questions about race, bodily autonomy, privacy and the disproportionate use of physical force by police against nonwhite suspects.

“When they’re violating the bodies of black women, I think there’s this perception in society that that’s par for the course, that that’s to be expected and that combines with these profiles of black women as drug couriers, drug concealers, as people who are always hiding drugs in some part of their body,” said author Andrea J Ritchie to the Guardian.

She continued, "And so I think those things kind of combine in the minds of grand jurors to: ‘Well, isn’t this how we wage the war on drugs, isn’t this what we think black women are doing all the time anyway? So we’re not going to hold this officer liable for basically doing the job we told them to do.’”