'They see him as their human molotov cocktail': Michael Moore tells Colbert why he knew Trump would win 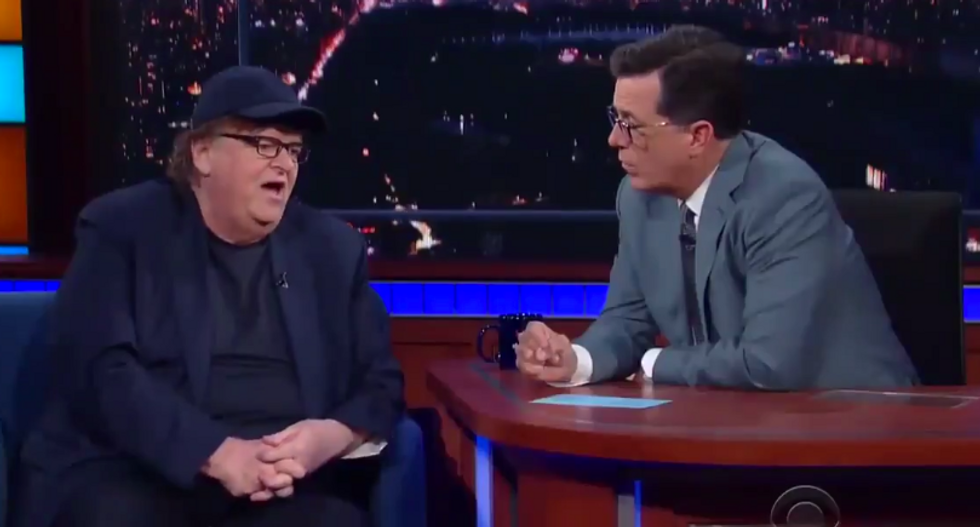 Documentary filmmaker and Michigan native Michael Moore was perhaps one of the only people who correctly predicted that Donald Trump would defeat Hillary Clinton in 2016.

On Monday, he shrugged off a sarcastic congratulations from Late Show host Stephen Colbert, and explained how he knew America’s “molotov cocktail” would be victorious.

“A year ago, you wrote an open letter predicting Donald Trump would win,” Colbert began. “When no one else thought he was gonna win, you said, ‘No, I think he’s gonna win.’ So first of all, congratulations?”

“No, I’ve never wanted to be more wrong in my life,” Moore replied.

“I was trying to warn the rest of the country, out here, people who voted for [Barack] Obama were telling me they were gonna vote for him,” Moore explained. “So I actually contacted the people in the Clinton campaign and said, ‘I think you need to spend more time in Michigan, Wisconsin, Ohio and Pennsylvania. These are the Brexit states of America.”

“And there’s a lot of angry people, they don’t necessarily like Trump that much but they see him as his human molotov cocktail that they just want to throw into the system that has hurt them so badly,” Moore continued. “And I couldn’t get anybody to listen to me.”

TONIGHT: @MMFlint​ was one of the first to predict Trump's win in the 2016 election. But where does he think we can go from here? #LSSC pic.twitter.com/F2tZIiIFDR