'This is Nazi f*cking America!': Watch what happens when a NC woman confronts man with swastika flag 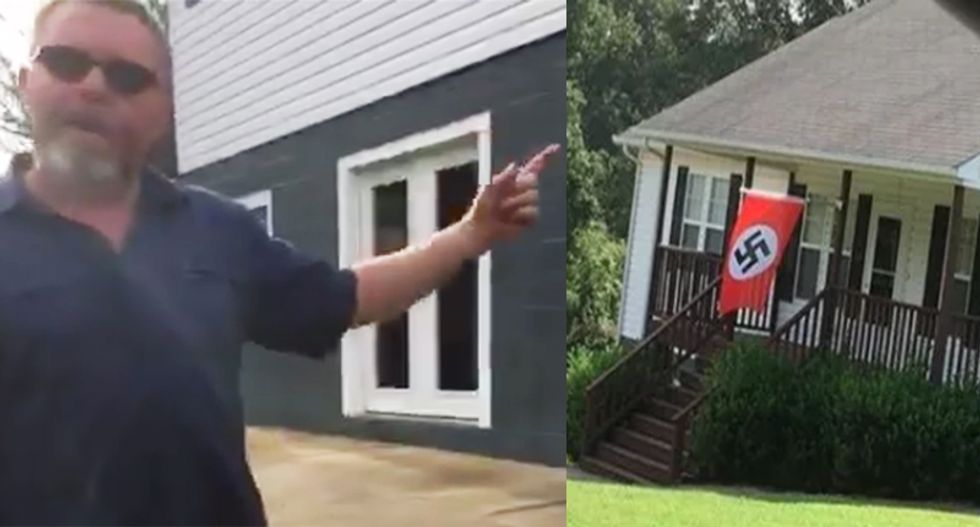 In wake of the violence in Charlottesville, Virginia, one North Carolina woman was inspired to speak out against someone flying a Nazi flag she saw in Mount Holly in Gaston County.

Page Braswell told The News & Observer that she couldn't remain silent after seeing the violence in Virginia. She didn't know Joe Love, the man flying the flag. Still, she pulled into his driveway on Sunday ready for a confrontation.

“I thought, ‘What? This is my town,’” she said in a video that has since gone viral.

In the video, Braswell shows the flag as well as a sticker supporting Donald Trump on the man's truck.

“Hey! What’s up with the Nazi flag?” she's heard asking.

Love asked who she was and what the flag has to do with her. He tells her his name as well as a profanity-laced commentary. He said he wasn't a Nazi but “this is Nazi f*cking America.”

He told her that the flag was none of her business but then asked, “Where do you live? What kind of flag do you fly?”

She responds that she flies a rainbow flag. He then called her a "queer" and a "lesbian."

Braswell actually identifies as a straight, white married woman and doesn't actually fly a rainbow flag, though she said that she would like one. His language was a shock to her, though she understands it is a typical thing members of the LGBT community hear all the time.

“They’ve got to be brave every day. There’s no reason I can’t be brave for two minutes,” she explained. “If people are doing it, we need to call it out. If we don’t, it’s just going to get worse.”

Braswell volunteers at the Charlotte women's clinic, so angry protesters are not a new experience. She said that if the two had a civil conversation she might not have posted the video featuring the man's name, address and family business. Instead, he attacked her and called her names.

In an interview with the Gaston Gazette, Love said that he only hung the Nazi flag because his three previous Confederate flags had been stolen.

“That used to be a religious symbol in India until Hitler got ahold of it,” Love explained. “A lot of people don’t know that... I agree with the symbol as it started out as a religious symbol. But as far as backing Hitler and being a white supremacist and Hitler, I’m not into that.”

The man did not clarify if he was a practicing Buddhist or a Hindu, however. Instead, he said he'd take it down and put up another Confederate flag.

Braswell said that the Confederate flag is "still horrible" but she probably wouldn't have reacted so strongly because there are so many in her county.

Over the weekend, many encouraged conversations or confrontations against Nazis or white supremacists, but urged caution given the many reports of violence at the hands of the groups.

“Not everyone will be able to confront racism, but here’s the thing: We white people caused this mess, and it’s our mess to clean up,” Braswell said on Facebook. She is willing to take the risk, however.

“This is Gaston County,” she said, unafraid. “We are all armed and have lots of mean dogs.”

Watch her full video below: