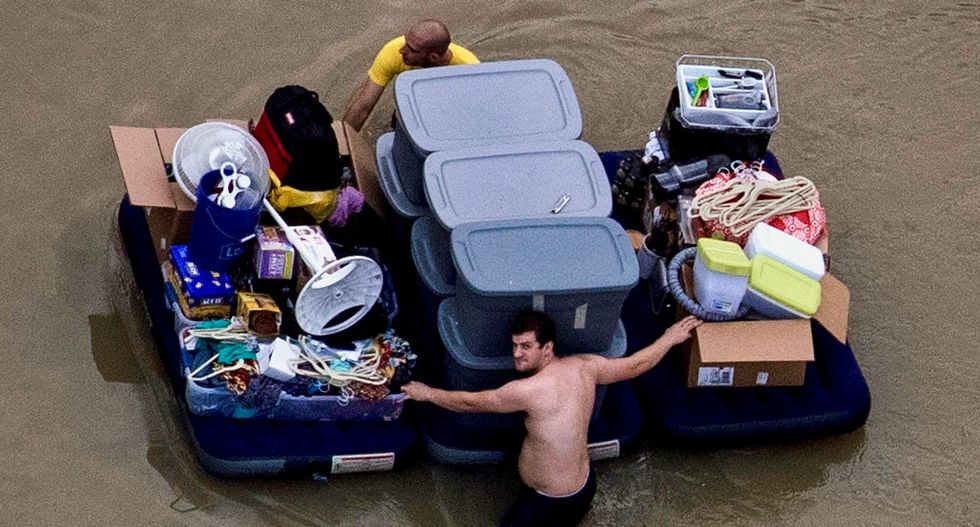 Soldiers and police in helicopters and special high-water trucks on Thursday rescued thousands of Texans stranded by floodwater dumped by Hurricane Harvey, which killed at least 37 people as it drenched the Gulf Coast this week.

In Beaumont, Texas, doctors and nurses evacuated some 190 people from a hospital that halted operations after water service in the city of almost 120,000 people was knocked out by the storm. Harvey came ashore over the weekend as the most powerful hurricane to hit the state in a half-century.

"We don't have any water. Water shut down. We can't run (kidney) dialysis," and other procedures, said hospital security guard Devan Campbell, standing outside as about 190 patients were led out.

Some 779,000 Texans had been ordered to evacuate their homes and another 980,000 had fled on their own amid concerns that swollen reservoirs and rivers could bring new flooding even as Harvey, downgraded to a tropical depression, headed inland, according to Department of Homeland Security acting Secretary Elaine Duke.

In the U.S. energy hub of Houston, which was paralyzed by the storm earlier in the week, firefighters conducted a block-by-block search of homes to rescue stranded survivors and recover bodies.

The flooding also caused a series of explosions at a chemical factory northeast of Houston, where officials warned that more blasts were likely to come.

Orange County, which borders Beaumont around 50 miles (80 kms) east of Houston, on Thursday ordered remaining residents to evacuate the area amid a forecast that the Neches River would crest on Friday, threatening homes.

"We're having some issues with flooding on the Neches," Orange County Judge Stephen Brint Carlton said. "It could certainly affect thousands of homes, but we're not sure how many people are still inside of them." [L2N1LH1MQ]

AMID FLOODS, NO DRINKING WATER

Ryan House, 44, and his 79-year-old mother Sally traveled to Baptist Beaumont Hospital to pick up medicine only to find a full evacuation in process, with some loaded into helicopters and others into trucks.

"I have just enough medicine for now," House said as he turned and walked back to his car in the city.

While some 32,000 people across the region had headed to emergency shelters, the Houses planned to remain in their home.

"We got a couple big 5 gallon jugs from our neighbor who has a hot tub and we are using that to flush the toilets," said Sally House.

"The American people are with you. We are here today, we will be here tomorrow and we will be here every day until this city and this state and this region rebuild bigger and better than ever before," Pence told a crowd outside a Rockport church damaged by the storm.

Moody's Analytics estimated the economic cost from Harvey for southeast Texas at $51 billion to $75 billion, ranking it among the costliest storms in U.S. history.

The event has drawn comparisons to 2005's Hurricane Katrina, which killed more than 1,800 people in New Orleans. Then-President George W. Bush's administration was widely criticized for the haphazard initial response to that storm and the Trump administration was taking care to be seen as responding quickly to the first major natural disaster it faced.

President Donald Trump was to return to the region on Saturday, Pence said.

The storm prompted the U.S. Energy Department to authorize the first emergency release of crude oil from the Strategic Petroleum Reserve since 2012, as global fuel prices spiked higher.

Early Thursday, the sound of explosions rang out at a chemical plant in Crosby, Texas, owned by Arkema SA. Refrigeration systems failed in a truck storing volatile chemicals, which ignited as they warmed, sending smoke plumes 40-feet (12-meters) into the air, according to company and public safety officials.

After the multiple blasts, local public safety and company officials insisted there was no risk to the public outside the 1.5-mile (2.4-km) safety perimeter, even though they said eight more trucks storing the same chemicals would eventually catch fire.

"They are going to burn with intensity," said Bob Royall, assistant chief of emergency operations at the Harris County Fire Marshal's Office. "Most of the material is going to be consumed by a very hot fire."

An Arkema company official described the smoke as a noxious irritant created after refrigeration systems on a truck used to store the chemicals failed, causing them to overheat.

The U.S. Environmental Protection Agency said in a statement that the amount of toxic materials released appeared to be too small to present a public health concern.

Some signs of normal life returned to Houston, the nation's fourth most populous city. Businesses began to reopen downtown, commuters returned to roadways, and shelter residents headed out to check on their flooded homes.

That proved a heartbreaking experience for some.

Anita Williams, 52, was among dozens of people lined up Thursday morning at a shelter at Houston's George R. Brown Convention Center to register for aid from the Federal Emergency Management. She said she had returned to her neighborhood on Wednesday to survey the damage to her one-story house.

"It's not my house anymore. My deep freezer was in my living room," she said, her voice breaking.

(For a graphic on storms in the North Atlantic, click: http://tmsnrt.rs/2gcckz5)