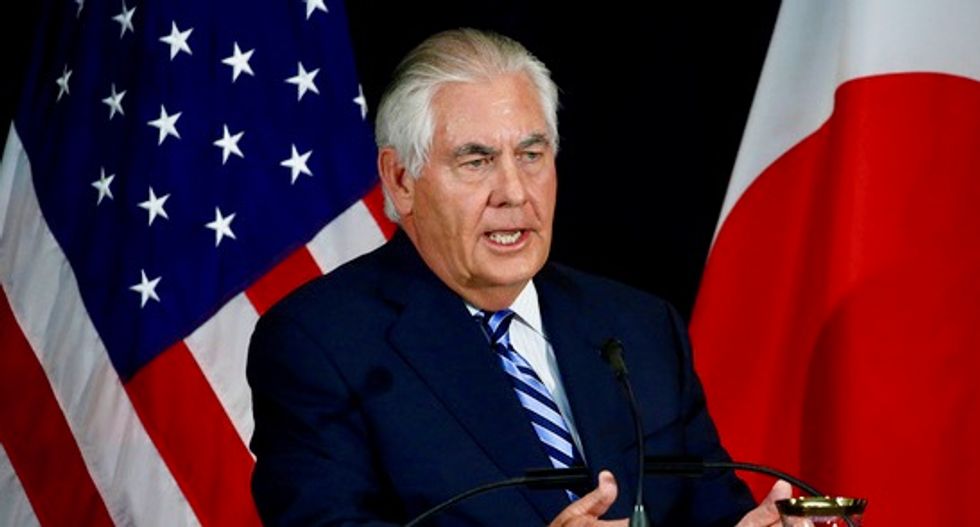 U.S. Secretary of State Rex Tillerson issued a forceful condemnation of "bigotry in all its forms" on Friday and called for national reconciliation as he promised to work toward making the government more racially diverse.

His remarks, to State Department interns and fellows, dozens of whom were recruited through programs targeting minority candidates, followed the backlash from political and business leaders over President Donald Trump's response to Saturday's white nationalist violence in Charlottesville, Virginia.

Tillerson invoked the 1865 second inaugural address by Abraham Lincoln, the president who freed the slaves and presided over the Civil War against rebellious pro-slavery Confederate Southern States.

As the war drew to a close, Lincoln asked the nation to bind up its wounds from the conflict, Tillerson noted.

"We, too, today should seek to bind up the wounds," Tillerson said. "We must pursue reconciliation, understanding and respect regardless of skin color, ethnicity or religious or political views."

Though Tillerson acknowledged First Amendment protections for free speech, he said those who embrace hate speech "poison our public discourse and they damage the very country that they claim to love."

Tillerson did not mention Trump's comments on the Charlottesville violence, which erupted as white nationalists protested the removal of a statue of Confederate General Robert E. Lee.

The president has said anti-racism counter-protesters shared blame for the violence. He has also decried the removal in numerous cities of "beautiful" Confederate monuments.

Tillerson, who was chief executive of oil giant Exxon Mobil Corp before becoming secretary of state this year, said one of America's defining characteristics "is the promise of the opportunity for advancement regardless of your skin color, how much money your parents make or where you came from."

He announced a new State Department policy in which at least one candidate for any opening for an ambassador post must be a minority, noting that currently only about 12 percent of U.S. senior foreign service officers are non-white.

"The State Department must redouble our efforts to increase diversity at the highest ranks of the department, including at the ambassador level," Tillerson said. As the arm of government representing the United States abroad, the department should be a "clear display of America's values and our people, not just in our mission but in the composition of our work force," he added.

Statistics published by the State Department show that as of the end of June, 88 percent of senior foreign service officers - the high-ranking diplomats from which the country's ambassadors are drawn - are white and 4 percent are black. One-third of senior foreign service officers are women, and 7 percent of the agency's civil service members are Hispanic.

To remedy the lack of diversity, Tillerson said he had told committees that nominate ambassadorial candidates at least one candidate for each opening must be a member of a minority group.

To recruit a more diverse young talent pool, Tillerson also said the State Department needs to look beyond elite universities, and should more aggressively recruit at the dozens of historically black colleges in the United States.

"America's best and brightest are not just from the Ivy League, but they're from a lot of other places in the country: Laredo, Texas; Detroit, Michigan; Roanoke, Virginia," he said.