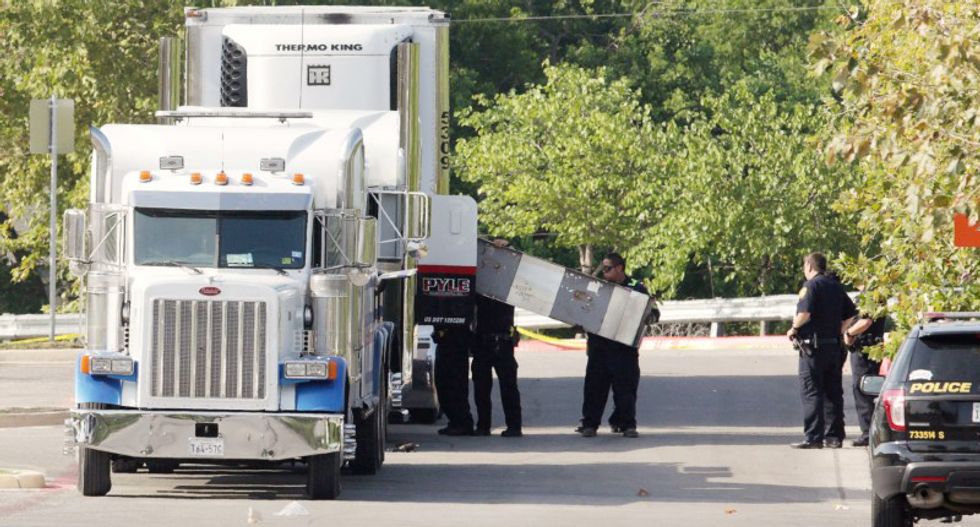 Police officers work on a crime scene after eight people believed to be illegal immigrants being smuggled into the United States were found dead inside a sweltering 18-wheeler trailer parked behind a Walmart store in San Antonio, Texas, U.S. July 23, 2017. REUTERS/Ray Whitehouse

AUSTIN, Texas (Reuters) - A truck driver accused of smuggling immigrants inside a packed and sweltering tractor-trailer through Texas, 10 of whom died, was formally indicted by a federal grand jury on Wednesday on charges that can carry the death penalty, prosecutors said.

A lawyer for Bradley was not immediately available for comment.

The incident was one of the deadliest cases of immigrant smuggling in recent U.S. history and brought renewed attention to the dangers of human trafficking.

Law enforcement was called to investigate a suspicious tractor trailer in a Walmart parking lot in San Antonio on July 23 and found about 39 people in the trailer, eight of whom were dead. Others were in perilous health, and two died later, court documents showed.

Many of the immigrants in the trailer ran when Bradley opened the doors. Nearly 200 people may have been inside the truck, according to the documents.

Bradley told law enforcement officials that he did not know about he was carrying human cargo.

"Bradley said he went to open the doors and was surprised when he was run over by 'Spanish' people and knocked to the ground," the criminal complaint said.

Seven men from Mexico and an 18-year-old man from Guatemala were among the dead. The other two fatalities included a juvenile whose name has not been made public and an adult who has not yet been identified, prosecutors said.

Of the survivors, 22 were in federal custody and charged as material witnesses, two remained in hospital and five were released from hospital and turned over to U.S. immigration authorities, prosecutors said.

Some survivors have sought to offer testimony in exchange for consideration of visas that would allow them to stay in the United States, their attorneys said.

In 2003, 19 people died after traveling in an 18-wheeler truck through Victoria, Texas.