Trump adviser Steve Bannon says the US is in economic war with China: media 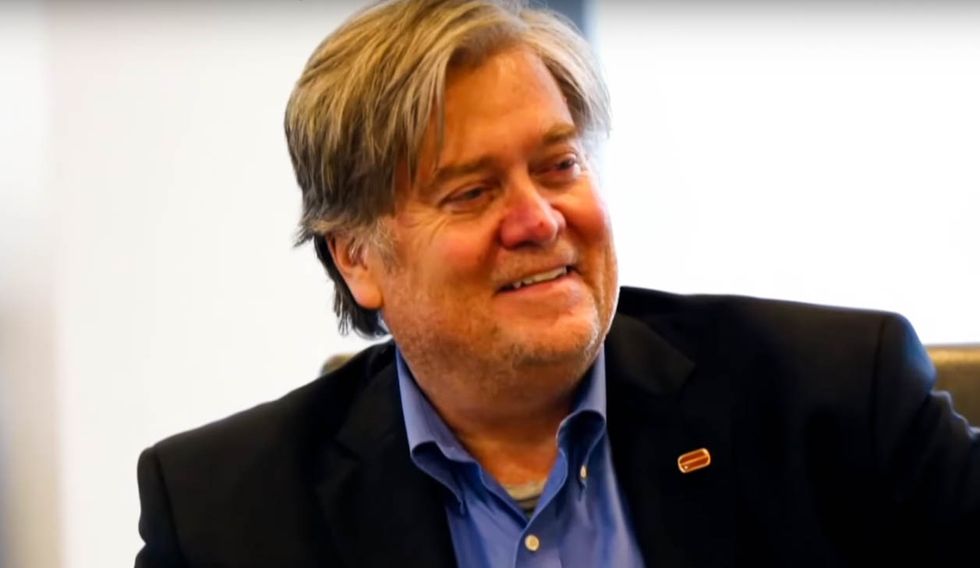 The United States is in an economic war with China, U.S President Donald Trump's chief political strategist has said, warning Washington is losing the fight but is about to hit China hard over unfair trade practices.

"It's in all their literature. They're not shy about saying what they're doing. One of us is going to be a hegemon in 25 or 30 years and it's gonna be them if we go down this path," he was quoted as saying.

"If we continue to lose it, we're five years away, I think, 10 years at the most, of hitting an inflection point from which we'll never be able to recover."

Chinese Foreign Ministry spokeswoman Hua Chunying said she had seen the report, and reiterated the essence of the China-U.S. trade relationship is mutually beneficial.

"In reality, China and the United States' long term cooperation has brought about real benefits for both countries' peoples, any unbiased person will clearly see this fact," she told a daily news briefing in Beijing.

"We have also said before, a trade war has no future. A trade war does not serve the interests of any party, as fighting a trade war will not produce a winner. We hope that relevant parties can stop viewing issues of the 21st century with a 19th- or 20th-century mentality."

Bannon said the United States would use Section 301 of the 1974 Trade Act against Chinese coercion of technology transfers from U.S. corporations doing business in China and follow up with complaints against steel and aluminum dumping, according to prospect.org.

On Monday, Trump authorized an inquiry into China's alleged theft of intellectual property in the first direct trade measure by his administration against Beijing.

"We're going to run the tables on these guys. We've come to the conclusion that they're in an economic war and they're crushing us," said Bannon, who acknowledged he was battling trade doves within the U.S. administration.

He said there was no reason to go soft on China in order to get Beijing's support over North Korea because he believed China would do little more to rein in Pyongyang.

Bannon said he might consider a deal in which China got North Korea to freeze its nuclear build-up with verifiable inspections and the United States removed its troops from the Korean peninsula, but such a deal seemed remote, prospect.org reported.

In contrast to Trump's threat of "fire and fury" against North Korea, Bannon said: "There’s no military solution, forget it."

"Until somebody solves the part of the equation that shows me that 10 million people in Seoul don't die in the first 30 minutes from conventional weapons, I don’t know what you’re talking about ..."

Asked about any connection between his economic nationalism and white nationalism in the United States, and in particular the racist violence in Charlottesville, Bannon said: "Ethno-nationalism — it's losers. It's a fringe element."

"I think the media plays it up too much, and we gotta help crush it, you know, uh, help crush it more. These guys are a collection of clowns."

However, Bannon, who formerly led the right-wing website Breitbart, said focusing on race would help the Republicans politically.

"The Democrats, the longer they talk about identity politics, I got 'em. I want them to talk about racism every day. If the left is focused on race and identity, and we go with economic nationalism, we can crush the Democrats."