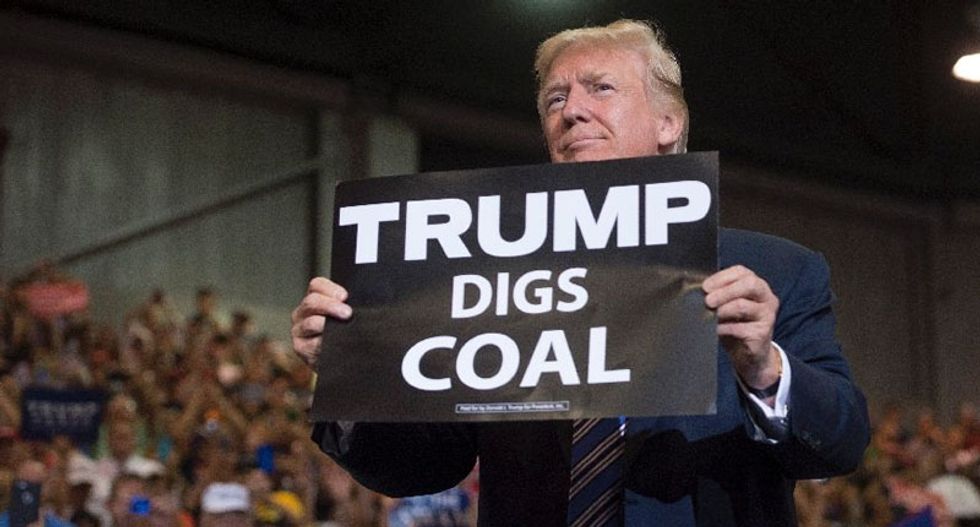 Donald Trump described Russian interference in the 2016 presidential election as a "total fabrication" Thursday amid reports that a special prosecutor has impaneled a grand jury to investigate the issue -- a step toward possible criminal indictments.

"We didn't win because of Russia. We won because of you," Trump said at a campaign-style rally in West Virginia.

"The reason why Democrats only talk about the totally made-up Russia story is because they have no message, no agenda, and no vision," he said. "The Russia story is total fabrication. It's just an excuse for the greatest loss in the history of American politics."

His comments came after the Wall Street Journal revealed that special counsel Robert Mueller has impaneled a grand jury to investigate Russia's interference with the 2016 presidential election.

The newspaper, citing two unnamed sources familiar with the matter, reported that the grand jury had begun its work in the US capital Washington "in recent weeks."

The move is a sign that the sweeping federal investigation -- which includes allegations that Trump campaign officials coordinated with Russia to tilt the election in the Republican's favor -- is gathering pace.

The establishment of a grand jury will allow Mueller -- a former FBI director -- to subpoena documents and get sworn testimony. It could well lead to criminal indictments.

"You don't impanel a grand jury unless your investigation has discovered enough evidence that you feel reflects a violation of at least one, if not more, criminal provisions," he said.

"If you secure an indictment, your next step is to arrest the defendant."

Presidential lawyer Ty Cobb said he was not aware that a grand jury had been convened.

"Grand jury matters are typically secret," Cobb said, adding that "the White House favors anything that accelerates the conclusion of his work fairly."

"The White House is committed to fully cooperating with Mr Mueller."

White House spokeswoman Sarah Huckabee Sanders said the president was not likely the subject of the investigation.

"Former FBI director Jim Comey said three times the president is not under investigation and we have no reason to believe that has changed," she said.

Trump has repeatedly denied allegations of collusion, saying he is the victim of a political "witch hunt" and "fake news."

But he has been forced to acknowledge that his eldest son, Donald Jr, his son-in-law Jared Kushner and his then campaign advisor Paul Manafort did meet a Kremlin-connected lawyer to get dirt on Hillary Clinton.

Mueller is also said to be investigating Trump's financial records unrelated to Russia or the election, CNN reported.

Trump has publicly warned Mueller that his financial dealings should be out of bounds and investigating them would cross a red line.

If called to testify before a grand jury, Trump would not be the first president to do so. Then president Bill Clinton was forced to give details about his relationship with Monica Lewinsky, evidence that was used in his impeachment.

Thursday's revelations will only fuel speculation that Trump may try to curb the investigation by firing Mueller.

Two US senators introduced a bipartisan bill Thursday to pre-empt that move by insulating Mueller.

The legislation, sponsored by Democrat Chris Coons and Republican Thom Tillis, would bar a president from directly firing the special counsel without a judicial review.

Under the bill, Mueller would be allowed to challenge his removal in court in the event he is fired without good cause.

"A back-end judicial review process to prevent unmerited removals of special counsels not only helps to ensure their investigatory independence, but also reaffirms our nation's system of check and balances," Tillis said in a statement.

Coons added: "Ensuring that the special counsel cannot be removed improperly is critical to the integrity of his investigation."

US to hand over 3,500-year-old 'Gilgamesh' tablet to Iraq

The ancient tablet, which a wealthy US collector had acquired along with other Iraqi artifacts to display in the Washington Museum of the Bible, will be handed over to Iraqi officials at the Smithsonian Institution on September 23.