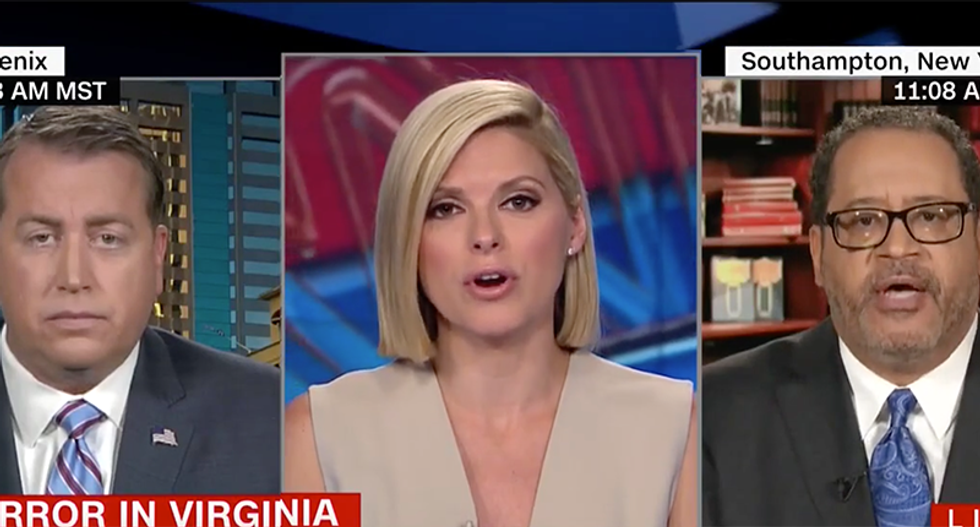 It did not go well when a member of President Donald Trump's campaign advisory council went up against Michael Eric Dyson over the tweet the president retweeted of a CNN reporter being hit by a train.

CNN host Kate Bolduan asked Jeff DeWitt what he says to fellow Republicans who criticized Trump for not coming out sooner to denounce the white supremacists involved in the violence in Charlottesville, Virginia. DeWitt claimed that no person can speak out enough when it comes to acts of racism.

"I'm saying I don't know that any of us can go far enough," he replied. "We have to fight like crazy, as a country to come together to push the hateful ideologies like the KKK and white supremacists out of our country. We need to come together and there's never a time we can ever say --"

That's when Dyson cut in, having clearly had enough spin. He wondered "how an image of a train running over someone" is "bringing the country together."

"If the president had said what you just said, if the president said what you just said, then that would be far enough," he continued. "He would, number one, enunciate what he is opposing. Two: articulate the groups he is opposed to. Three: cite their ideology and four, call in an active domestic terrorism. The failure to do so suggests he is incapable of imagining a country where race is at the bully pulpit he occupies."

Dyson went on to say that anyone claiming that going that route is somehow wrong is simply part of the failure.

"Let's be honest, since he tweets what is on his mind and says clearly what is on his mind, it's not on his mind," Dyson explained. "He is not as disturbed by the bigotry and hate in our country as many others are. Shame on him for that. We have to stop making excuses as our guest is making for a president who is a fully grown man. Grow up. Take responsibility for your actions. Republicans and conservatives are always telling us in this nation, pull yourself up by the bootstrap, be responsible and you make excuse after excuse for a full-grown man who violates the fundamental principles that occupies the highest office in the land."

DeWitt swore that he wasn't making excuses and that he personally knows what is in the president's heart and that it is not racism.

Dyson shot back asking what the birther comments were about, if Trump isn't a racist.

"Was that in his heart when he accused Mexicans of being rapists?" Dyson continued. "It's not what's on his heart, it's what's on his mouth and public policy that makes a difference. It's not his sentiment and emotions which are private, it's the reprehensible emotions against vulnerable people. That's the problem."

DeWitt said that Dyson was forgetting the many times Trump denounced the same things and stood up for Americans. Bolduan noted that for each time Trump denounced it in the past there is a tweet that can disprove it.

Watch the argument below:

Trump supporter dumbstruck when asked 'how... by sarahburris

Trump supporter dumbstruck when asked 'how... by sarahburris

Former US president Donald Trump moved Wednesday to block the Treasury from handing over years of his tax records to a congressional committee, which some believe could expose abuse of tax laws.

In a Washington court filing Trump's lawyers objected to a Justice Department order last week that the Treasury, after stalling for years, needed to provide the House Ways and Means Committee with six years of records that Trump has long refused to make public.