US states hit back at EPA chief over climate rule guidance 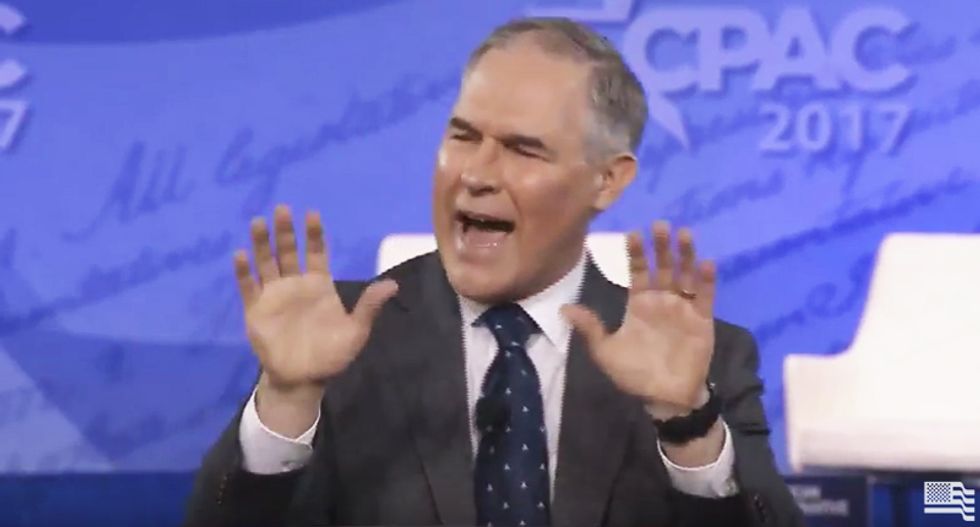 Democratic state officials blasted the U.S. Environmental Protection Agency on Thursday for telling governors in what they describe as a "legally incorrect" letter in March that they do not need to comply with a major climate change regulation.

Fourteen Democratic attorneys general and officials from six cities and counties said the guidance that EPA Administrator Scott Pruitt sent to states on March 30 was misleading because the Clean Power Plan enacted under former President Barack Obama, a Democrat, remains on the books despite the Republican Trump administration's plans to unravel it.

The Clean Power Plan was aimed at curbing carbon emissions from power plants. It never took effect because the Supreme Court put it on hold in February 2016.

The state officials said the regulation "remains the law of the land" even if it is currently on hold and that Pruitt's "unsolicited legal advice" to governors was "premature and legally incorrect." They called for Pruitt to retract his letter.

The move is the latest tussle between Democrats who back the regulation and the new administration, conservative states and the coal industry, which oppose it.

An EPA spokesman was not immediately available for comment.

Pruitt said in his guidance that because the case is on hold, "states and other interested parties have neither been required nor expected to work towards meeting the compliance dates," which were deadlines set for states as part of their implementation of the rule.

A legal challenge to the regulation brought by 27 conservative-leaning states remains pending at the U.S. Court of Appeals for the District of Columbia Circuit.

The court has delayed issuing a ruling in the case due to the administration's plan to reconsider the regulation. President Donald Trump, a Republican, signed an executive order in March ordering the agency to consider rescinding the rule.

Schneiderman and other state officials also questioned why Pruitt sent the letter since he has said he would recuse himself in his current role. The former Oklahoma attorney general had participated in the challenge.

State attorneys general have had some success in battling back against agencies’ plans to roll back Obama-era climate regulations.