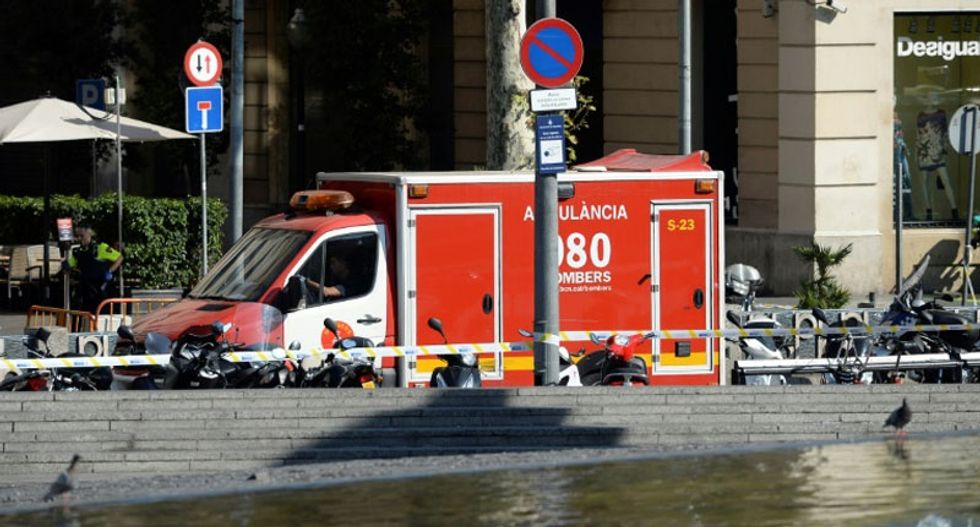 The area around the incident on Las Ramblas has been cordoned off by security services. (AFP / Josep LAGO)

A driver deliberately ploughed a van into pedestrians on one of Spain's busiest streets on Thursday, killing as many as 13 and wounding a number of people in what police said was a "terrorist attack".

Officers in Spain's second-largest city said the ramming on Las Ramblas was a "terrorist attack" and a police source said one suspect had left the scene and was "holed up in a bar".

A local security source told AFP that at least two people had died in the van attack and around 20 were wounded.

The police source said they were hunting for a total of two suspects.

The famous Las Ramblas boulevard is one of Barcelona's busiest streets, normally thronged with tourists and street performers until well into the night.

"Huge collision on Las Ramblas in Barcelona by an individual driving a van, many injuries," a police statement said.

The area around the incident was cordoned off, with several ambulances and police vehicles on the scene, an AFP correspondent said.

Witness Aamer Anwar told Britain's Sky News television that he was walking down Las Ramblas, which he described as "jam-packed" with tourists, when the attack happened.

"All of a sudden, I just sort of heard a crashing noise and the whole street just started to run, screaming. I saw a woman right next to me screaming for her kids.

"Police were very, very quickly there, police officers with guns, batons, everywhere. Then the whole street started getting pushed back."

Vehicles have been used in several terror attacks in Europe in recent years, including a jihadist massacre that claimed 86 lives in the French Riviera city of Nice.

Spain had so far been spared the kind of extremist violence that rocked nearby France, Belgium and Germany.

But it was hit by what is still Europe's deadliest jihadist attack in March 2004, when bombs exploded on commuter trains in Madrid, killing 191 people in an attack claimed by Al Qaeda-inspired extremists.

Ethan Spibey, a charity director on holiday in the city, said he had taken shelter in a nearby church with several others after Thursday's van ramming.

"All of a sudden it was real kind of chaos... people just started running screaming," he told Sky. "There was kind of a mini stampede.

"It seems like a lot of people have taken refuge in shops and local cafes."

The Nice onslaught in July last year and other similar attacks including the carnage in Paris 2015 were claimed by the Islamic State jihadist group.

Spain has emerged as a potential target for jihadists, with extremist websites mentioning it for historical reasons, since much of its territory was once under Muslim rule.

But they publicise every arrest of alleged jihadists, most of them detained for propaganda, recruitment for extremist groups or "glorifying terrorism."

According to the interior ministry, more than 180 "jihadist terrorists" have been arrested since June 2015 when Spain raised the terror alert level to four out of a maximum of five, in domestic and foreign operations.

Lawyers for Saudi Crown Prince Mohammed bin Salman have argued that his appointment as prime minister qualifies him for immunity from lawsuits in US courts, including one related to the 2018 killing of journalist Jamal Khashoggi.

Prince Mohammed, who previously served as deputy prime minister and defence minister, was named prime minister by royal decree last week, sparking concern from human rights activists and government critics that he was looking to skirt exposure in cases filed in foreign courts.

Trump rages at the media over Herschel Walker abortion allegations: 'He's being slandered and maligned'

NFL legend-turned GOP candidate for the U.S. Senate, Herschel Walker, claims to be a staunch pro-life conservative who wants to ban abortion in his state. But according to a report from The Daily Beast that broke this Monday, he allegedly made at least one exception for a woman he impregnated back in 2009.

An unidentified woman claims Walker urged her to get an abortion and after she followed through with the procedure, Walker reimbursed her for it.