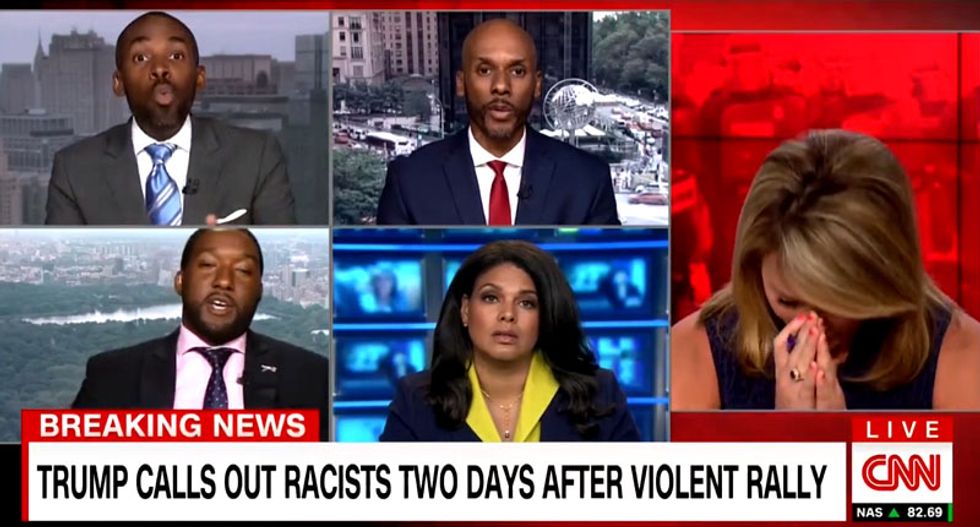 A CNN panel with four black commentators quickly spiralled into a shouting match after Keith Boykin remarked that he was ashamed of President Donald Trump surrogate Paris Dennard "as an African American."

The comment came as the panel was discussing Trump's response to the outbreak of violence over the weekend in Charlottesville, Virginia.

"I am well aware of my blackness and don't need you to classify me as being one," Dennard shot back.

"Are you?" Boykin asked.

"Keith, don't go there. Do not go there!" Dennard replied. "I know what it means to be a black man in this country. And I experience racism on a regular basis by being a Trump supporter and a proud American who happens to be a Republican."

"So that's the racism you experience? From being a Trump supporter?" Boykin interrupted.

"Let me finish!" Dennard said. "I get racist comments about my family, about my mother, about my girlfriend, about my character, every single day, mostly coming from black people, Keith."

Dennard added -- as Boykin continued to interrupt -- that his family had faced racist violence from the Ku Klux Klan in Georgia.

"Paris, you are going off the rails here," Boykin interjected, adding he was obviously "very sensitive" about the topic.

CNN host Brooke Baldwin tried repeatedly to calm the two down, but was unsuccessful.

"You disrespect African Americans every day when you come on here on this show," Boykin told Dennard.

Baldwin briefly regained control of the segment, and told the two men to take their conversation off camera. But they began arguing once again, with Boykin insisting Dennard needed to "shut up."

Baldwin buried her face in her palms.

"This is where we are now in this country?" Baldwin asked.