WATCH: John Oliver taps Weird Al Yankovic to help him beg North Korea not to nuke the US 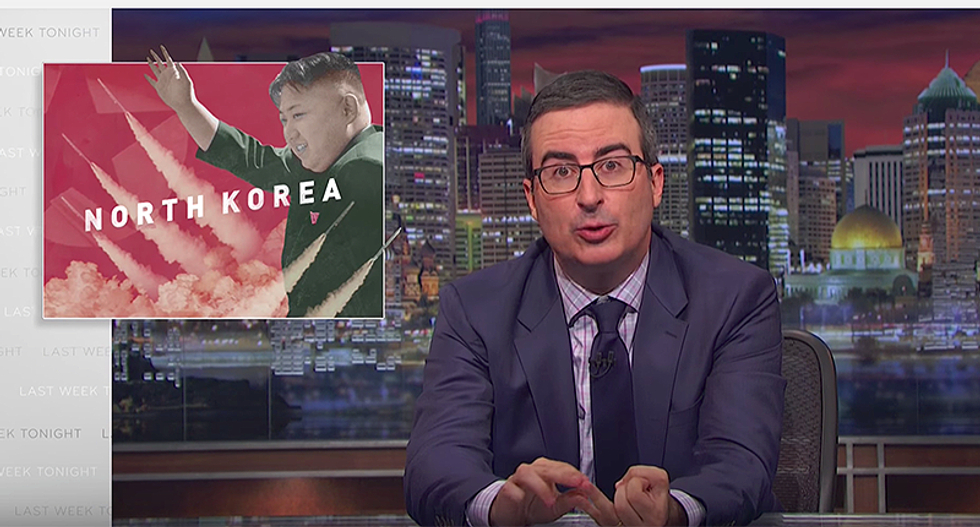 The world came far too close to the brink of a nuclear war last week, and all President Donald Trump did was egg it on. After railing against Trump's inability to disavow Nazis, Oliver focused his main part of his show on the impending doom we face with two insane world leaders.

While it can be amusing to poke fun at North Korea, Oliver noted that it isn't actually funny for people who actually live in the path of his fire.

“It’s a dark place, figuratively and literally,” said Oliver, showing a satellite image of the country at night with little to no lights coming from the country. They have so little electrical infrastructure that it's one of the darkest places in the world. He said that it looks like a “divorced dad's Christmas tree. He gave up halfway through decorating, got drunk and fell asleep watching Ken Burns' Baseball."

He went on to call the describe North Korea as having an “economy smaller than that of Birmingham, Alabama,” while Kim Jong-Un is “terrified of losing power." The U.S. has become a kind of useful villain against Kim Jong-Un as a country that has everything North Korea wants from iPads to freedom of speech. However, there are brave activists working to change the way the country is viewed to the dictator by smuggling in USB drives. They're packed with American TV shows like The Mentalist, Desperate Housewives and NCIS, which Oliver blasted as the worst possible television to represent us.

"Who the f*ck is watching NCIS?" Oliver asked. “All your mom’s friends and the people of North Korea.”

That's why Oliver decided to take his message directly to the people North Korean, hoping that his friendly song with Weird Al Yankovic can be smuggled over the border. He hopes that North Koreans can understand that not all Americans are bad and egging on war like Trump. Thus, Yankovic launched his latest tune: “Please don’t nuke us, North Korea," using an accordion, which apparently the country loves.