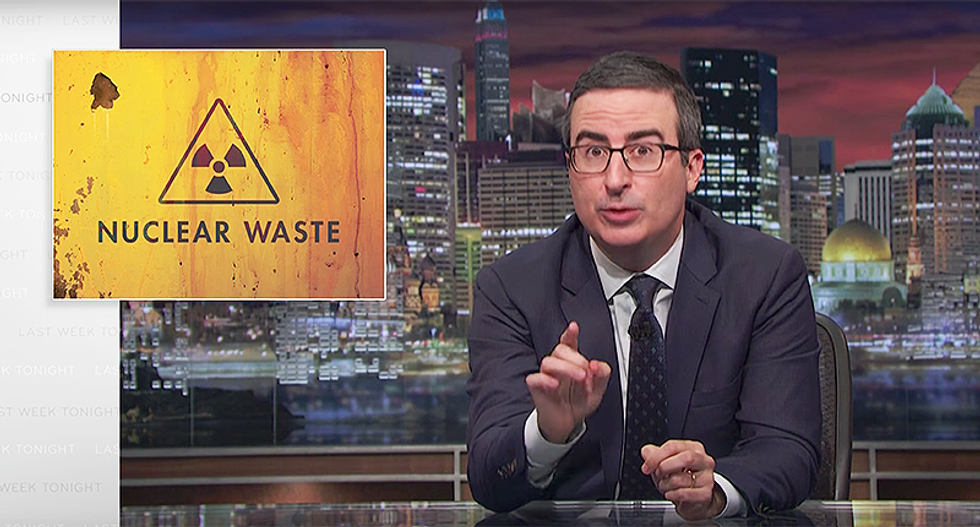 The United States has a nuclear waste problem, according to John Oliver, and it's one that is going to kill us.

After railing against Fox News, Oliver pointed out that America has enough nuclear waste to fill “one football field, 20 feet high," thanks to nuclear power plants. That doesn't even count the additional 100 million gallons left over from the production of nuclear weapons. In fact, the U.S. has so much of it that one out of three Americans live within 50 miles of nuclear waste.

The problem, other than the fact that far too many Americans live close to a radioactive, unstable, cancer-causing substance, is that policymakers have been avoiding dealing with the problem for more than 70 years. There's no permanent facility to house the waste because no one wants that in their backyard or in their Congressional district. Instead, one in three Americans gets it. Nevermind the risk of glowing raccoons or nuclear sewer rats with superpowers, the problem is gradually poisoning the environment while politicians squeeze their eyes shut with their fingers in their ears.

One site, which was never meant to be permanent, is Hanford, Washington, which has earned the award for being “the most polluted place in the Western Hemisphere." It's already leaking into the water table and the food chain. Another nuclear site in Missouri is literally creating radioactive alligators from its leaking nuclear waste. Thankfully, St. Louis hasn't been taken over by a Godzilla-style attack, but Oliver reports the people living in the area all have deadly cancers. Another nuclear site in California sits on a fault line next to the ocean, so it is literally unstable. Oliver called it like something from the opening scene of “a movie starring the Rock that you watch on a plane.” Those are just three out of many.

The whole problem, Oliver explains, is like living in a house with no toilet, using paper bags for excrement and then praying it won't leak. So, the literal "ticking time bomb" or Geiger-counter-clicking problem can be fixed by some kind of giant "nuclear toilet" to store everything. The Yucca Mountain nuclear waste repository in Nevada is supposed to be exactly that toilet, but the project has stalled due to the bureaucratic nightmare caused by former Sen. Harry Reid (D-NV), because, again, who wants that toilet in their backyard.

Now, the project is lead by Department of Energy Secretary Rick Perry, who couldn't even remember that he wanted to eliminate the department to begin with. So, while the country spends its days watching The Apprentice-style government that Donald Trump has created with actual Nazis, North Korea and Russian hackers, Oliver hopes people can remember that one in three Americans is 50 miles from a festering, ill-contained paperbag of lethal radioactive garbage. The rest that don't develop cancer, must contend with the atomic-power killer reptiles.

Watch the full video below and good luck sleeping tonight.