WATCH: 'SNL' compares Trump Jr's Russia meeting with an episode of ‘To Catch a Predator’ 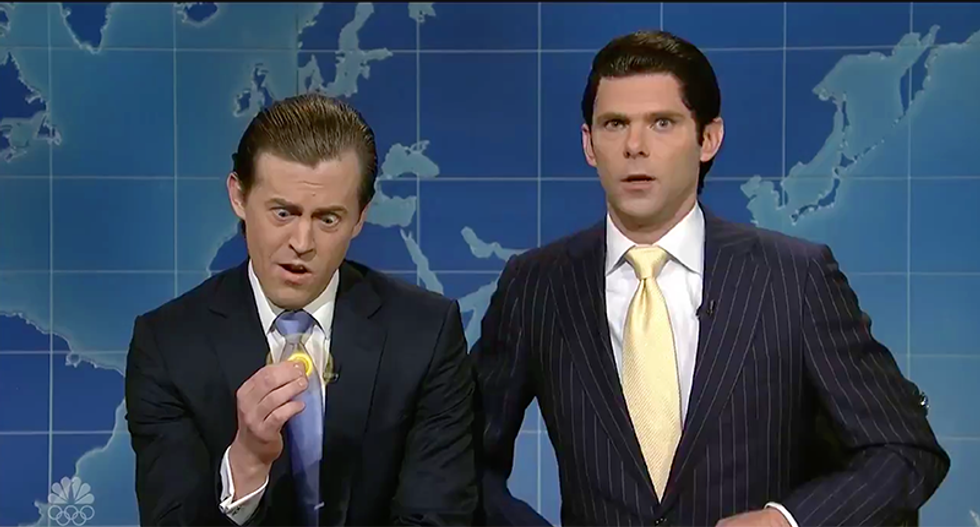 The news is so absurd that "Saturday Night Live" had to come out of their summer vacation schedule to issue a Weekend Update to handle the news.

The Weekend Update: Summer Edition dealt with the staff shake-ups at the White House, particularly noting that former communications director Anthony Scaramucci "barely got the tip in."

But when it came to the successes of President Donald Trump's administration, the SNL cast brought the two Trump sons in to help spin.

“ISIS is on the ropes,” said Mikey Day as Donald Trump Jr. “The border has never been more secure, and the story of the summer-”

“When you met with the Russians?” actor Alex Moffat asked as Eric Trump.

“No, Eric,” Don Jr. sneered. “No one cares about my meeting with the Russians anymore.”

Co-host Colin Jost wanted to know what Don Jr. thought about the developments in the investigation into the possible collusion with Russia.

“The whole story is a nothingburger,” Don Jr. concluded. “Yes, I went to the meeting, but nothing illegal happened. It’s like on 'To Catch a Predator!' If a guy shows up to a house with a 12-pack of Mike’s Hard Lemonade, turns out it’s a sting. Guy shouldn’t get in trouble because nothing happened!”

Jost wanted to know about the statement that Don Jr. released that his father not only cleared but helped him write.

“All my father did was give me some advice,” Don Jr. promised. “He said, ‘Son, go out there and tell the truth.'”

“And then he winked!” Eric revealed.

Don Jr.'s solution was to distract his brother with a fidget spinner. Ultimately, Eric built his own Trump empire with Legos, which his brother praised him for. The Trump Lego Hotel even had Batman checking in.

In an interview with Scaramucci - the former White House staffer repeated his attacks on senior aide Steve Bannon, telling him to "s" his own "c."

Watch the hilarious clips below:

“It’s been a crazy year these past few weeks.” #WeekendUpdate pic.twitter.com/GVRhdZhMle