WATCH: Trump supporter goes down in flames after suggesting people who oppose Nazis are as bad as Nazis 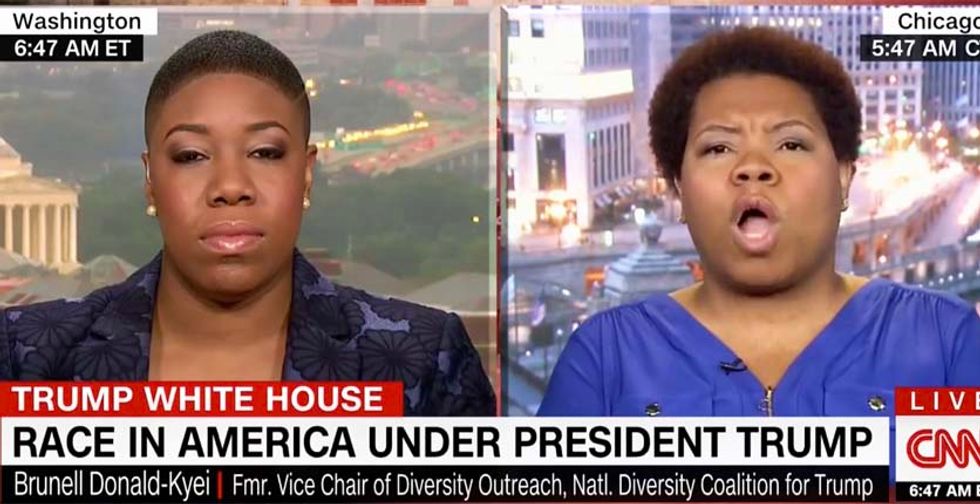 A former vice chair of outreach for President Donald Trump found herself cornered Tuesday morning after trying to make the case that people who turned out to protest against the white nationalists in Charlottesville were every bit as bad as the neo-Nazis who took part in the march.

Appearing with host Chris Cuomo and CNN regular Symone Sanders, attorney Brunell Donald-Kyei attempted to make the case that President Donald Trump put the whole issue of not addressing racism to bed with his nationally televised speech on Monday.

Along the the way, she reiterated Trumps previous statement that violence came from "many sides."

"My condolences as a fellow American to those who passed as well as those hurt," Donald-Kyei began. "What I'll say is the president has come out expressly against this violence, but also too, Miss Symone, there were people on the left who were pouring urine on journalists -- all types of violence.

"I'm waiting for people to come out and condemn that as well," she challenged. "You can't just condemn one and not the other. you condemn it across the board."

As Sanders attempted to reply, host Cuomo jumped into the fray.

"Hold on, " Cuomo interjected. "Brunell, the two sides, the many sides argument. Help us understand it better from your perspective, because I just want to be clear, do you see those who went there to oppose Nazis as the same as the Nazis?"

"I believe that first of all, you had a situation where you had people marching.The people saying white supremacists were marching and they had a permit and then you have these counter protesters come in, and any time you have a situation where you've got groups that are on extreme sides, like I said there should be --," she offered before Cuomo cut her off.

"See, that's the point I don't get," Cumo pressed. "Are those extreme sides to you? Do you see somebody who opposes white supremacists, who want everybody on this panel to be eradicated from the United States as being equally as extreme as the white supremacists?"

"What I'm saying is that I don't believe that in black supremacy or white supremacy or Hispanic supremacy," Donald-Kyei deflected.   "I believe we should address any kind of hatred and extreme across the board. It shouldn't be something that we are letting one get away with it more than any other."