'We're not even Muslims': Hindu family attacked by confused racists -- who can't even spell 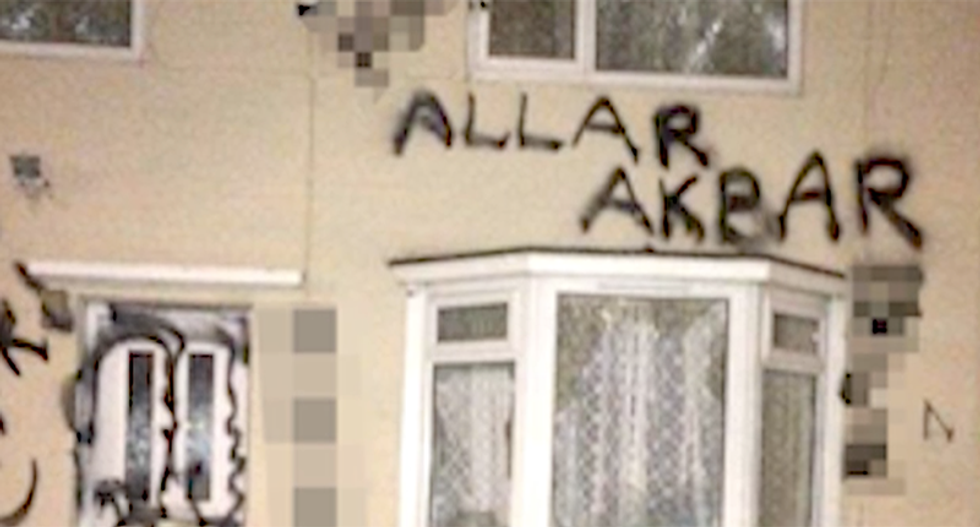 A xenophobic attack on a Hindu family from Sri Lanka was spotted in the early morning hours Sunday.

In a Stapleton Avenue, Speke neighborhood in the U.K., a Hindu family was moving into a new house. Vandals smashed windows and scrawled graffiti across the building. The problem, however, is that they seemed confused and had trouble spelling things, according to The Liverpool Echo.

The attack read "Allar Akbar," but they presumably meant "Allahu Akbar," the Arabic phrase meaning "God is greatest" that is often used by Muslims.

"We have been getting the house ready so I can move in with my family," said the resident, who wanted to remain anonymous. "I have been living in London for 11 years and we are moving here to join my brother. I’ve never seen anything like this before."

He noted that he is both "upset" and "scared now," because he has "a wife and three children." Yet, despite the fear, he plans to still move into the house.

"We are not even Muslims, we are Hindus, and we hate the terrorists also," he said.

Despite the attack, the owner said that the neighbors have been kind.

"I got the shock of my life when I woke up this morning and saw the outside of the house," said one nearby resident. "It’s heartbreaking. I’ve lived here 15 years and this is the first time anything like this has happened. I just hope it hasn’t put off the family who are moving in. The vast majority of people in Speke are not like that."

Detective Inspector Debbie Tipton said that they will not tolerate hate crimes in the community and assured residents that everything is being done to investigate and locate the perpetrators.

"It’s sickening to think that people think that this kind of behaviour is acceptable," he added. "Everyone has the right to live peacefully within their community and to go about their daily lives without harassment from others just because they are perceived to be different. We will take the strongest possible action against those who behaved in this unacceptable way."

"Everyone has the right to live peacefully within their community" https://t.co/HRuX1brevM
— Liverpool Echo (@Liverpool Echo)1503896400.0

Watch their video of the cleanup below: