'You shoot them': Trump-backed Philippines president says he will order police to kill human rights activists 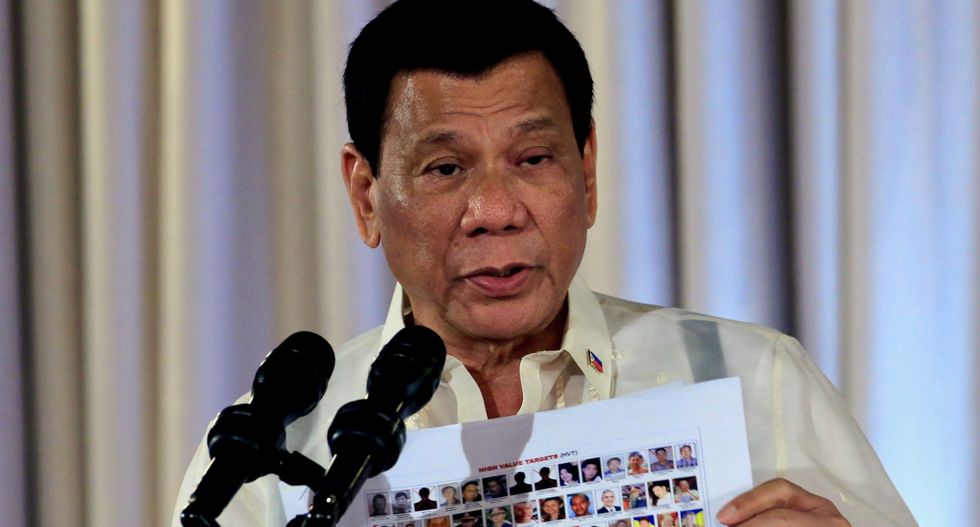 Philippines President Rodrigo Duterte this week warned that he could order the shooting of human rights activists if he deems them guilty of "obstructing justice."

Rappler reported that in remarks on Wednesday, Duterte opined that shooting activists could be a way to teach them what true human rights abuses looked like.

"Tell them, 'Police, shoot those who are part of it.' If they are obstructing justice, you shoot them," Duterte said, according to a translation provided by Rappler. "So they can really see the kinds of human rights."

The president also vowed to investigate human rights groups in the future.

Human Rights Watch on Thursday called on Duterte to withdraw his statement.

“President Duterte’s threats against human rights activists is like painting a target on the backs of courageous people working to protect the rights and upholding the dignity of all Filipinos,” Phelim Kine of Human Rights Watch said. “Duterte should retract his reprehensible remarks immediately before there is more blood on his hands.”

Presidential Donald Trump has come under fire for praising Duterte's drug war, which has allegedly killed scores of innocent people.

In an April phone call, Trump told Duterte that he was doing an “unbelievable job on the drug problem.”

“I just wanted to congratulate you because I am hearing of the unbelievable job on the drug problem,” Trump remarked. “Many countries have the problem, we have a problem, but what a great job you are doing and I just wanted to call and tell you that.”