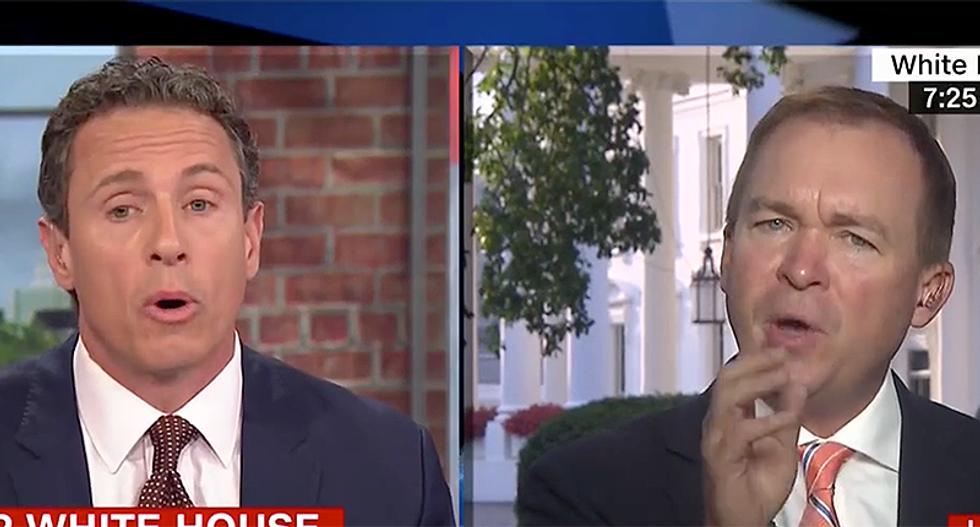 President Donald Trump has made it clear that he wants the Affordable Care Act, known as Obamacare, to fail. He is waiting for its collapse, he told reporters. Now he might be finding ways to force it into collapse.

Trump's head of the Office of Management and Budget, Mick Mulvaney, told CNN's Chris Cuomo that they will continue giving insurance companies their reimbursements on a month-by-month basis. The tactic is something some have alleged is causing instability in the markets.

"But aren't you, then, holding those payments hostage and encouraging the insurers to do exactly what they're doing, which is to say that they have to raise premiums because of the uncertainty?" Cuomo asked. "The exact same thing you say is the problem?"

Mulvaney said that it felt like they keep having the same conversation over and over again.

"Yeah, because you're dancing around the reality," Cuomo responded. "They need those payments so they can stabilize the markets and you're holding them hostage essentially putting people at risk."

A shifting Mulvaney claimed that the payments have been there for years and the markets aren't stable.

"Not all markets are unstable," Cuomo cut in.

Mulvaney then claimed that it was a false assumption that if the federal government gave the insurance companies their reimbursements that the markets would stabilize.

"More stable," Cuomo cut in. "The insurers are saying it. 'We're going to have to raise premiums if you don't get them to us.' What do you call that?"

Mulvaney said that the more stable option would be to repeal and replace Obamacare. Ironically, he said at the beginning of the interview that reports the Trump White House was refusing to move on to other things than healthcare were incorrect.

"The CBO said that every one of your suggestions made it worse," Cuomo said about the GOP healthcare proposals. "Every single one, the CBO said. And your reaction to that was to try and dismantle the CBO."

Mulvaney went on to trash the CBO scores for their proposed bills as well as the CBO's process.

Watch the heated exchange below: