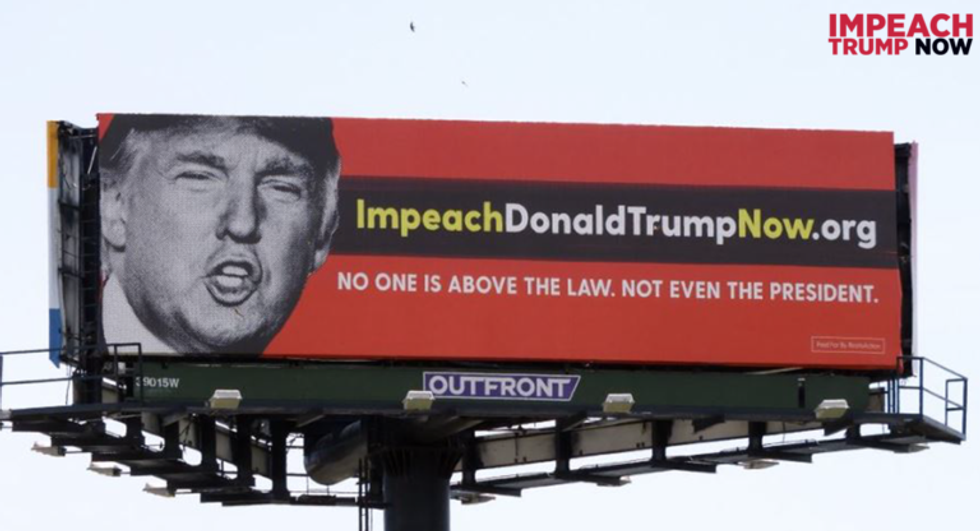 A political advocacy organization that's calling for President Donald Trump's impeachment has set up a billboard raising awareness of its cause right along the road that leads to Mar-a-Lago, the Trump-owned resort that his administration has dubbed the "Winter White House."

The billboard, sponsored by ImpeachDonaldTrumpNow.org, is located on Southern Boulevard in West Palm Beach, Florida -- the main road that leads from Palm Beach International Airport to Mar-a-Lago.

Recent polling shows that support for impeaching Trump has risen to the 40% range, which is typically a higher percentage than the number of people who approve of the job the president is doing. According to the current average of polls from Real Clear Politics, Trump's job approval number stands at just 38.5%, while his disapproval number stands at 56.5%.

"Momentum for impeachment is accelerating at the grassroots," explains Norman Solomon, national coordinator of the online activist group RootsAction.org, one of the cosponsors of the Impeach Donald Trump Now campaign. "As nationwide polling reflects, support for impeachment among the American people is vastly more widespread than what exists on Capitol Hill right now."