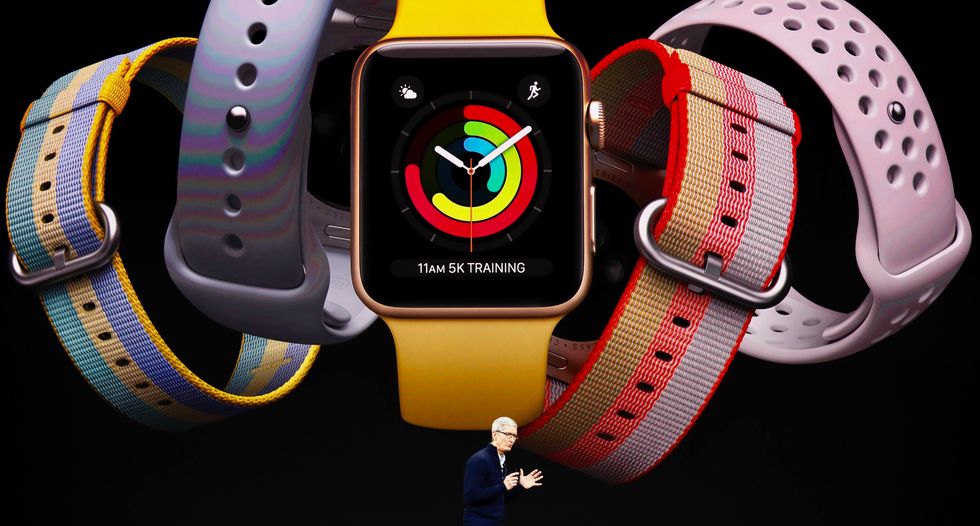 Tim Cook, CEO of Apple, speaks as product images are shown behind him during a launch event in Cupertino, California, U.S. September 12, 2017. REUTERS/Stephen Lam

Apple Inc rolled out a new version of the Apple Watch on Tuesday, marking the first introduction at the company's biggest product launch in years, which was expected to showcase a completely redesigned top-of-the-line iPhone.

Chief Executive Tim Cook opened the event at the Steve Jobs Auditorium on Apple's new campus with a tribute to co-founder and former CEO Jobs, who died in 2011.

The first major product announcement came from Chief Operating Officer Jeff Williams, who revealed an Apple Watch that includes built-in cellular. Previous version of the watch had required customer to carry a phone for internet access.

Gene Munster, an analyst with Loup Ventures, believes sales of the watch could double or even triple because of the new connectivity. The cellular watch will cost $399.

Apple did not provide sales figures for its watches, but Cook said sales had risen 50 percent from the year before and that the Apple Watch was now the best-selling watch in the world.

Apple's new high-end phone, expected to be called the iPhone X, could silence critics who say the company has lost its innovation edge.

Apple also introduced two other phones and an upgraded Apple TV at the event on Tuesday.

The Apple building itself was considered to be Jobs' final product, and Cook spent a few minutes boasting about the design, energy-saving features and public spaces at the new campus, including a flagship Apple Store.

The theater, never before open to the public, features an expansive glass-enclosed lobby, with two massive white stone staircases leading down to the auditorium. Inside, the decor is similar to that of Apple's stores, with hard maple flooring and tan leather seats.

The new products and the holiday shopping season that follows are the most important for Apple in years.

Shares of Apple, which had been trading slightly lower before the event kicked off, reversed course and were last up about 1 percent.

The new high-end phone is expected to feature an edge-to-edge display with richer colors and facial recognition to unlock the device without a fingerprint reader or physical home button.

The phones will likely boast a steep price tag. Bernstein analyst Toni Sacconaghi predicts the top-end model will cost $899, though other analysts expect it to top $1,000. That compares to a top base price of $769 for the iPhone 7 Plus.

Much of that added cost is driven by more expensive parts, like a higher-resolution display, 3D sensors and more memory capacity.

"Some of these components are just darned expensive. There's just no doubt about that," said Brian Blau, Apple analyst at Gartner.

The company is also expected to reveal more details about the HomePod, its voice-activated home speaker that competes with Amazon.com Inc's Echo devices and the Google Home speaker.

Apple announced the HomePod in June and said it will ship in December.

Australia's scandal-hit government on Thursday apologized for calling an alleged rape victim a "lying cow," sparking fresh claims of a "toxic" culture in the country's corridors of power.