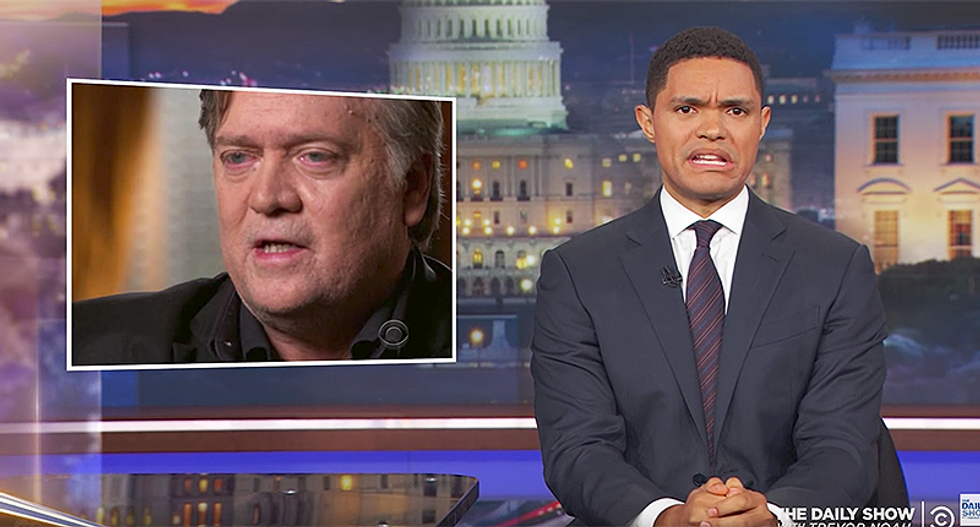 During Monday's episode of "The Daily Show," Noah cited Bannon's interview with Charlie Rose on Sunday's "60 Minutes," saying that Trump's decision on Deferred Action for Childhood Arrivals (DACA) was about keeping America safe.

“America is built on our citizens,” Bannon told Rose on Sunday. “Look at the 19th century, the control of borders. Economic nationalism is what this country was built on.”

Noah explained how immigration is part of the recipe for the "melting pot" of America. Bannon, on the other hand, forgets about things like slavery.

“You see what happened, there, my friends?” Noah asked, rhetorically. “They took down the statutes and Steve Bannon forgot the history, they were right.”

Perhaps that's why Noah and his researchers did the work to sort through the Bannon family immigration. Ironically, Bannon would be considered a Dreamer by his own standards.

“I don't know why he's fighting about this, we all know America is a nation of immigrants,” Noah continued. “But, just for fun, we called a professional genealogist who found out that Steve Bannon's great-great grandfather Lawrence Bannon arrived in the U.S. from Ireland by the 1850s, at a time when America's borders were so open that Irishmen could walk into the country with no passports, no visas, no background checks of any kind.”

“So in many ways, Steve Bannon's great grandfather was a Dreamer,” he concluded. “And his great grandson is a f*cking nightmare.”