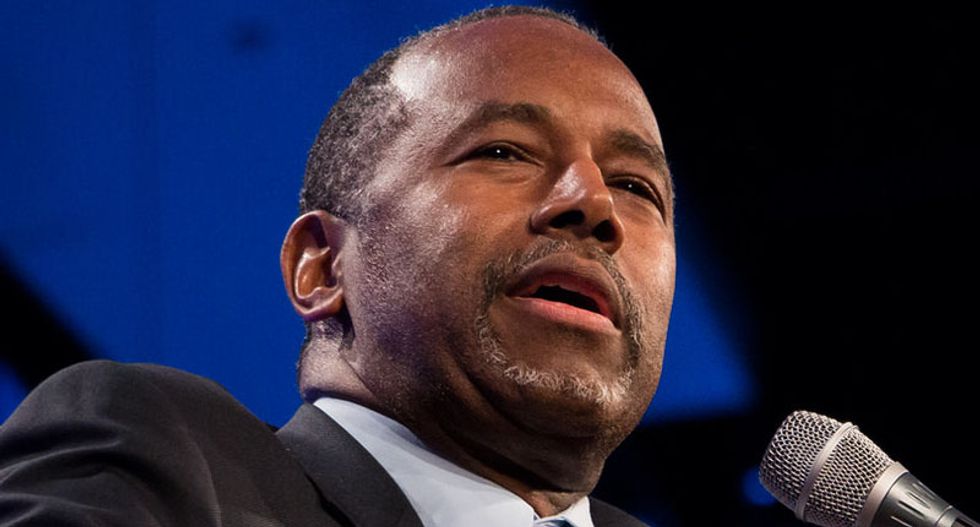 Housing and Urban Development Secretary Ben Carson spent Wednesday revealing his plan for how the agency will run with his employees. He's launching a multi-year reform plan with zero details on how he plans to "reimagine" the way HUD works. His other goals are how he can "restore the American dream" and "rethink communities in a more holistic way. Carson said he hopes he can single handedly "heal the nation" using housing policy.

According to Government Executive, Carson told the audience of staff that he feels "blessed" by his opportunity to run HUD. He claimed he accepted the position because the country is on the brink of "tearing itself apart."

Chief Operating Officer David Eagles said they haven't exactly finished the plan they intend to send to the Office of Management and Budget and that's why they were short on details. He swore, however, that it wouldn't be "a cost-cutting exercise." The Republican-led Congress has forced dramatic cuts to programs like HUD and Carson said he doesn't plan on allowing the years of deep cuts to continue. Since 2003, HUD has been forced to reduce staffing by 20 percent, according to the Office of Personnel Management.

Given Eagles and Carson haven't yet written the plan, they told the crowd they aren't positive what the final numbers will be, but they'll spend it "in efficient ways."

Staff was understandably frustrated by the lack of information about the plan, Government Executive said about the Q&A session that followed the speech.

When asked if they intend to close field officers, Eagles gave a contradictory answer: “Certainly that’s not part of the plan. We’re not going to close offices just to close offices.”

“With all due respect, we’re not really hearing too much,” said one staffer. “Will there be forced reassignments?”

Carson swore that there isn't a long-term plan for any forced reassignments. Eagles said the two of them were still “very early in the process” of developing the plan. Instead, all Carson could do is tell staffers he would be “very thoughtful, very transparent."

"I can tell you this is certainly not a [reduction in force] operation,” Carson promised. When questions were presented about how to handle involuntary reassignment, they two didn't have any idea, again, because there was no plan.

Their other major concern, according to Government Executive, is that the department lacks the political appointees in place to implement whatever plan Carson eventually gets around to putting together. Only four out of 12 key positions have been filled and that includes Carson himself, The Washington Post's "Appointee Tracker" revealed.

Low morale is causing additional problems. Data collection through OPM's Federal Employee Viewpoint Survey shows staffers have a low satisfaction with the skill-mission match; training and development; and strategic management. Eagles tried to spin the FEVS data as an indicator employee engagement has increased in the last year. Engagement may have improved because people are increasingly dissatisfied.

Staffers did applaud the idea of navigating immediate problems at the HUD headquarters. Namely, fixing the restrooms, installing wireless routers and putting in kitchenettes on each floor after their cafeteria was cut from the budget.

“When we feel better, we work better,” Carson said. “Then we really can do what we do, and that’s help people in need.”