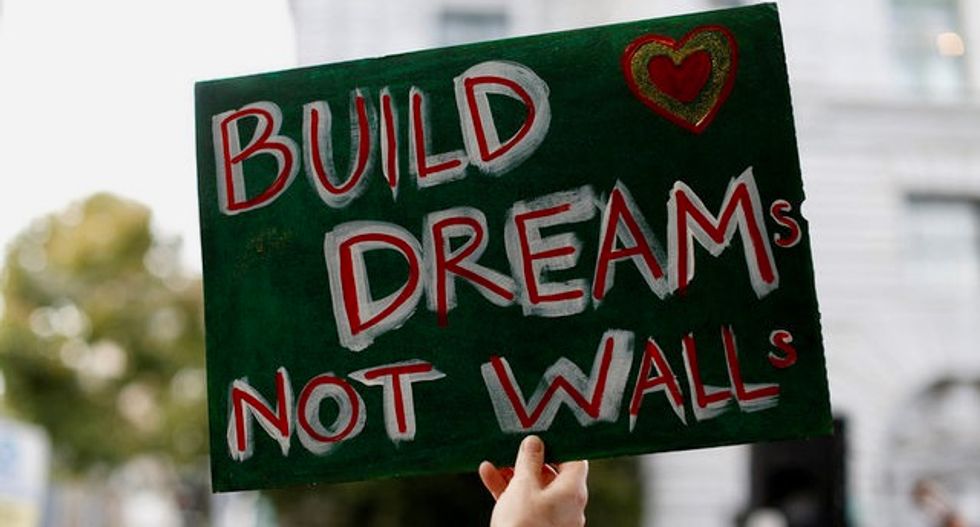 FILE PHOTO: A sign is seen during a rally against the rescindment of DACA (Deferred Action for Childhood Arrivals) program outside the San Francisco Federal Building in San Francisco, California, U.S., September 5, 2017. REUTERS/Stephen Lam

California and three other states sued President Donald Trump's administration on Monday over his decision to end protections for people brought to the United States illegally as children, the latest bid by Democratic state attorneys general to salvage the policy.

California Attorney General Xavier Becerra said Trump's move to rescind the Deferred Action for Childhood Arrivals (DACA) program that protected these immigrants from deportation and gave them work permits would be "an economic travesty" for the most populous U.S. state, which depends on immigrant labor.

Minnesota, Maryland and Maine joined California in filing the lawsuit in federal court in San Francisco.

Trump last week said he would end the program, which was created in 2012 by his Democratic predecessor Barack Obama, effective in March, giving Congress six months to determine the fate of the nearly 800,000 young adults covered by DACA, dubbed "Dreamers."

A Justice Department spokesman could not immediately be reached for comment. The department last week said Obama overstepped his constitutional authority when he bypassed Congress and created the program unilaterally.

If people protected under DACA lose their work authorization, the California lawsuit also said, then they would face the loss of employer-provided health insurance, which would potentially increase the state's expenditures on the uninsured.

"In California you don't become the world's sixth-largest economy, just because," Becerra said.

(Reporting by Dan Levine; Editing by Will Dunham)