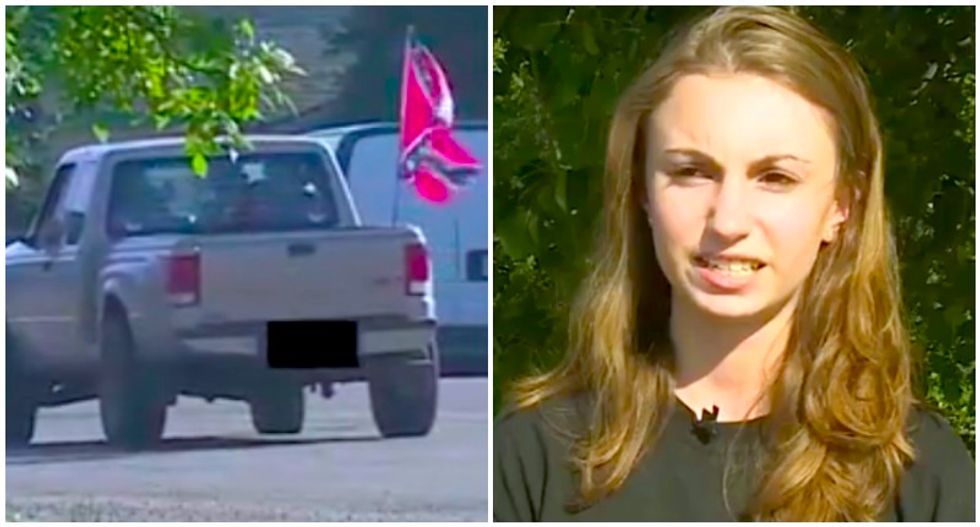 Pickup trucks flying Confederate flags rolled through as a Wisconsin teen told a TV station about the harassment she's endured since complaining about a classmate's Confederate flag sweatshirt.

Samantha Denamur took a photo of the boy's sweatshirt and reported him to the Elcho High School principal, who promised to review the dress code to see if such garments were prohibited, reported WSAW-TV.

The student took off the sweatshirt, which was made up entirely of the "stars and bars" pattern, by the end of the day, but Samantha's photo circulated among other students at the school.

Two students confronted the teen Wednesday, and all three were called into the principal's office to discuss the matter.

"She's getting harassed quite a bit at school by people she thought were her friends," said the girl's mother, Wendy Denamur. "I think there is a lot of misunderstanding about what that symbol is. It's a little bit embarrassing for the school and the community that they don't have that sensitivity about it, because life happens and it's bigger than this little town."

Samantha told the TV station that she was speaking up for students who were too scared to speak up -- and several pickup trucks flying the Confederate battle flag interrupted the interview as their drivers yelled out the window.

"I think this has always been in this community and we need to start evolving and realize this isn't just a white community," Samantha said. "Even if it was, hate toward other cultures is never okay."

The Langlade County Sheriff's Department is investigating the drivers who interrupted the interview, and it's not clear whether they were also students.

An attorney for the school district said administrators would examine the dress code policy to balance freedom of expression with creating a non-distracting learning environment.