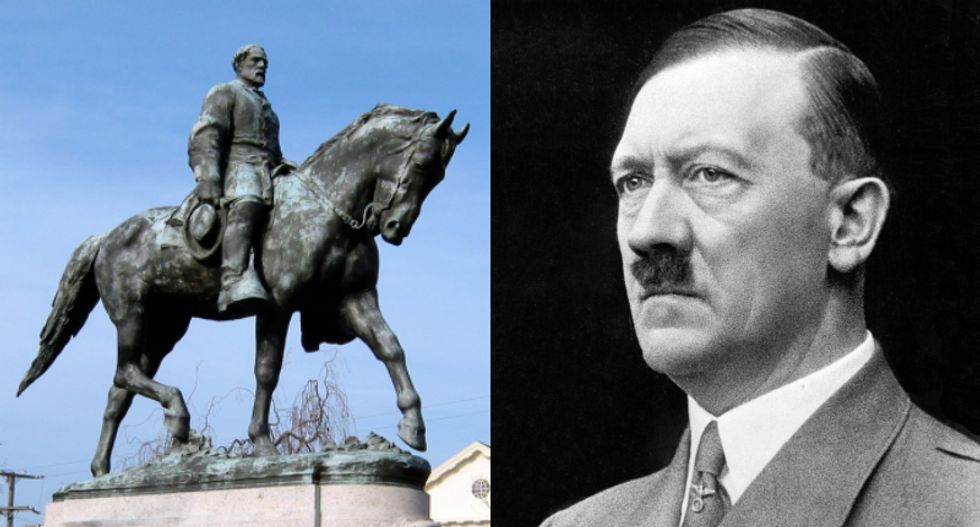 In Germany, the concept of keeping public reminders of the Third Reich is absurd due to laws against anti-Semitic hate speech and symbolism. So when Fulbright scholars from the European country visited San Antonio, Texas' Trinity University, they were blown away by the Confederate memorabilia they saw, the San Antonio Express News reports.

"We cannot imagine that [you] have such statues in public places,” Sania Rehman, a 21-year-old student from Goethe University Frankfurt who visited Trinity, told the Express.

Habiba Noor, an assistant professor at Trinity, organized the group of 13 Fulbright scholars born of immigrant parents in Germany to lead a presentation titled "Confronting Our History of Fascism" at the Texas school to "facilitate a meaningful exchange of ideas between Trinity students and visitors."

The students' understanding of their own history varied greatly from that of their American counterparts -- they reportedly found it strange when the Pledge of Allegiance was recited at a city council meeting they attended.

"The Holocaust and the Third Reich permeate German school curriculum," the report noted. "Beyond history, the subject is discussed in political science, religion and other classes — and students take field trips to concentration camps."

During the talk, which took place on Monday night on Trinity's campus, some of the German students expressed incredulity at the reminders of the pro-slavery Confederacy that surrounded them in light of their own country's sobering take on their own genocidal history.

“It’s not possible to think of a Hitler statue in Germany,” one of the students said during the talk.

“They would be in jail,” another confirmed.