'Don’t be a hypocrite like your president': Ex-White House aide shuts down Trump booster over Charlottesville 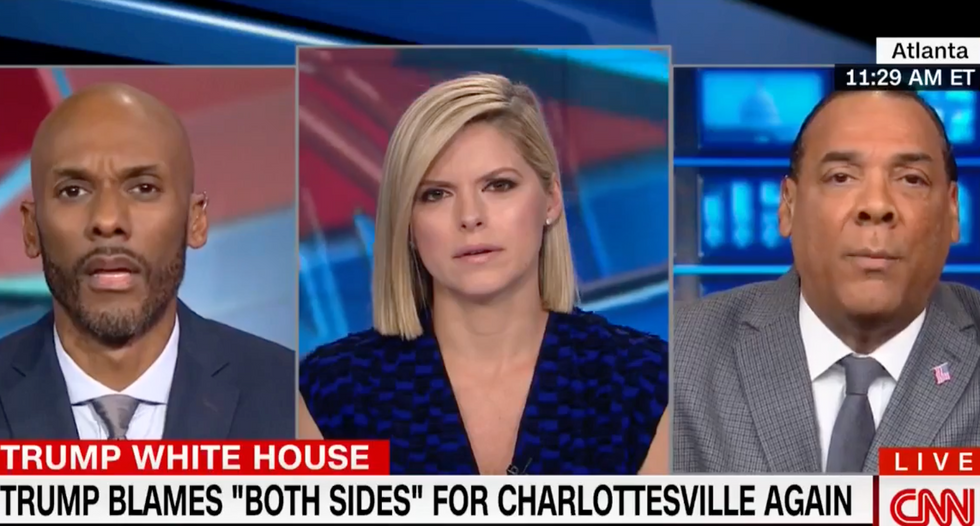 In a contentious interview on CNN Friday, White House aide to Bill Clinton Keith Boykin shut down Donald Trump advisor Bruce LeVell for defending the president’s equating of white nationalists in Charlottesville, Virginia with counter-protestors fighting against white supremacy—and for blaming a resurgence of the debate on the media.

During a wide-ranging press gaggle Thursday, Trump once again revisited his claim people “on both sides” were responsible for the violence in Charlottesville last month.

“I said, ‘You’ve got some very bad people on the other side,’ which is true,” Trump told reporters on Air Force One.

Discussing the president’s claim Friday, LeVell argued Trump “has made it very clear” he condemns the violence in Charlottesville, before adding, “I want to caution the media to stop giving them life.”

“It has no substance and is counter-productive especially what's going on in the world today of being threatened and blown up by North Korea,” LeVell argued, later adding, “President Trump is a really good man. I watch a lot of people come on the show and try to articulate his heart. I actually know him. He's a very compassionate man who cares about people.”

“It's disheartening to see this narrative being played out to put President Trump in this type of, you know, this category which is totally false,” LeVell said, describing labels like “racist” and “white supremacist” as “totally wrong, totally wrong.”

Boykin pointed out that it was Trump himself who resurrected the Charlottesville debate.

“It was starting to die down,” Boykin said. “He brought it up again. He didn't have to bring it up, and because of that, we are discussing it right now. When the president says that both sides have bad people on it and doesn't focus on the people who actually killed someone in Charlottesville, he's reigniting an old injury, a new wound if you will.”

“I made a list yesterday of all the people that Donald Trump has labeled racist recently on Twitter,” Boykin said. “The list includes Barack Obama, Bryant Gumbel, Tierre, Tavis Smiley, the TV show ‘Blackish.’ He calls these people racist and Trump gets upset when somebody attacks him and calls him a racist or white supremacist. The reason people call him that is because they see his behavior and the pattern of behavior that goes back before he took office, when he was sued by the federal government, when he was leading the charge against the Central Park five, when he was attacking Barack Obama for five years, the racist attack on his birth certificate.”

“The one Hillary [Clinton] started,” LeVell shot back.

LeVell later instead “there were other folks over there that came with a peaceful way to protest the statutes … the president has made it clear and said it's hate on all side, hate everywhere, that want to stop people from the First Amendment to peacefully protest. We're not going to sit up here and twist words around and jump in the president's head.”

“It's not about twisting words,” Boykin replied.

“Excuse me, excuse me. I didn't cut you off,” LeVell said, before turning to Trump’s conversation with Sen. Tim Scott (R-SC) about the events in Charlottesville.

“I don't know where to begin, but it's not about tax cuts or all that stuff,” Boykin replied.

“Start with the truth,” LeVell said.

“Whatever, you’re interrupting me now,” Boykin said. “We have one side, white supremacists, KKK members, neo-Nazis.”

“Here we go,” LeVell said with a sigh.

“Would you let me finish this time? Don’t be a hypocrite like your president.”