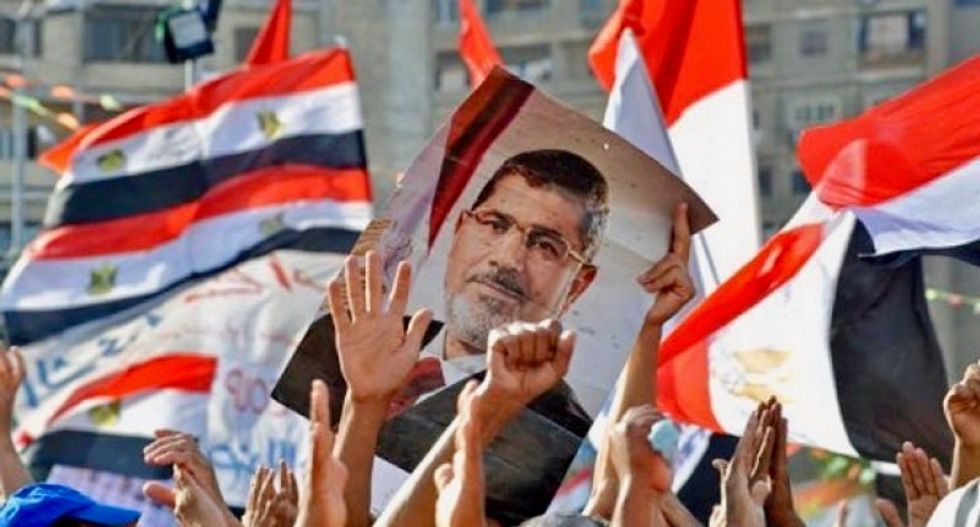 A top Egyptian court upheld on Saturday a life sentence for ousted Islamist president Mohamed Morsi in a case revolving around state documents leaked to Qatar, a judicial official said. The Court of Cassation ruling, which is final, overthrew a 15-year sentence for Morsi on charges of stealing the documents, handed during the initial sentencing. But…

Trump attacked Sens. Joe Manchin (R-WV) and Kyrsten Sinema (D-AZ) for voting in favor of the Inflation Reduction Act, but the "Morning Joe" host said that was pretty rich coming from a former president who signed off on a massive tax cut for the wealthy.

Fetterman posted a video of himself and his family thanking his supporters for their contributions, which totaled a record-breaking $11 million in the second quarter of 2022 and which averaged less than $30 per donation.

By Brian Lopez, The Texas Tribune

As a Texas school superintendent, Adrain Johnson is no stranger to the struggles small, rural public schools face, from trying to recruit teachers, especially after more than two years of navigating school during a global pandemic, to a general lack of resources. And now, after the school shooting in Uvalde, there’s a renewed conversation about campus security.

With so many problems to solve, Johnson, who oversees the Hearne Independent School District northwest of College Station, doesn’t understand why state lawmakers’ to-do lists heading into next year’s legislative session seem to focus more on school choice over something like school safety.

“There always seems to be a school choice debate every legislative year, and I’m not afraid of that. I think that debating is good. That’s part of democracy,” Johnson said.

But he also wonders why public schools always take a back seat to the pursuit of policies that could diminish them.

“Why not make it imperative to support the local school district?” he said.

Instead, from where he stands, the talk in Austin is already focused on school choice, the broad term applied to a host of taxpayer-funded alternatives to sending a child to the local public school.

Although the Texas Legislature doesn’t meet for another five months, Gov. Greg Abbott has voiced support for public school alternatives. Abbott has said he supports parents’ “choice to send their children to any public school, charter school or private school with state funding following the student.” And Democrat Beto O’Rourke, who will face off against Abbott in November, has also joined the debate, running ads asking people to “reject Greg Abbott’s radical plan to defund” public schools.

But in the northeastern corner of the state, Rep. Gary VanDeaver, a Republican whose district includes 30 rural school districts, is still unconvinced. He was one of several lawmakers who helped kill school choice legislation in 2017. He said one of the concerns he’s hearing from parents is that they’re paying property taxes, which fund public schools, but have opted for either home schooling or sending their kids to private school.

“I prefer to reduce their property taxes, so they have the option of spending that money any way they choose, whether it be alternative education choices, saving for college or purchasing a new car,” VanDeaver said.

Texas has passed some school choice measures. VanDeaver points to the approval of the state’s charter school system in the 1990s and giving students in low-performing schools the ability to transfer out of a district.

“Proponents of expanding school choice options often say the money should follow the student,” VanDeaver said. “Current Texas law already does that if a student transfers to another public school, including a charter school.”

From his vantage point, VanDeaver has good reason to be concerned. In smaller Texas cities and towns, there’s far less “choice” for rural students. Outside of large metro areas, private schools are few and far between. Many rural private schools have religious affiliations. And VanDeaver has been informed that the religious private schools in his area are uninterested in public money. He also worries about the damage to the local public school district a voucher program could cause.

“This sense of community is what makes Texas great, and I would hate to see anything like a voucher program destroy this community spirit,” he said.

Conservative efforts to pass school choice measures have failed largely because there are few private schools or charter schools as alternatives outside the state’s larger urban areas. Also, the public school systems are a large economic and employment driver for most small towns.

In Texas, schools are funded based on the number of students enrolled and the daily attendance on campus. Schools receive a base allotment of $6,160 per student each year. Texas is also home to more rural students than any other state, and its schools are funded through property taxes.

In addition to vouchers, lawmakers could consider education savings accounts, or ESAs, where the state places taxpayer dollars into accounts for families to be used for educational expenses such as private school tuition. But the funds can be also used for tutoring, online classes and even higher education expenses.

Then there are tax credit scholarships, which allow individuals or businesses to receive full or partial tax credits when they donate to scholarship funds that are then awarded to families to enroll in private schools.

Laura Colangelo, executive director of the Texas Private Schools Association, said either a tax credit or an ESA option would work well for Texas. Her organization is against a voucher policy.

“We’re about 20 years behind, and so I do think there are a lot of things that we could do to improve options — education options — for parents and kids in Texas,” Colangelo said.

But the struggle, again, will be convincing rural lawmakers that school choice is the way to go.

State Rep. Drew Darby of San Angelo told The Texas Tribune last week that he would oppose anything that would take away resources from Texas’ public schools.

Bill Tarleton, executive director of the Texas Rural Education Association, worries that private schools won’t allow for the same transparency and accountability because they don’t have elected school boards. He also questions whether any school choice legislation would really benefit all students because private schools can pick and choose whom they accept.

“Public schools are the only ones that have to educate all students,” Tarleton said.

VanDeaver said he’s not one to shut the door on any policy and looks forward to the debate next session. He wants to see a better accountability system created for private schools receiving the money.

“As conservatives, we expect it from our public schools,” he said. “We need to know that we’re getting bang for our buck for every educational dollar, wherever it’s spent.”

Disclosure: The Texas Private Schools Association and the Texas Public Policy Foundation have been financial supporters of The Texas Tribune, a nonprofit, nonpartisan news organization that is funded in part by donations from members, foundations and corporate sponsors. Financial supporters play no role in the Tribune’s journalism. Find a complete list of them here.

This article originally appeared in The Texas Tribune at https://www.texastribune.org/2022/08/08/texas-school-choice-legislation/.