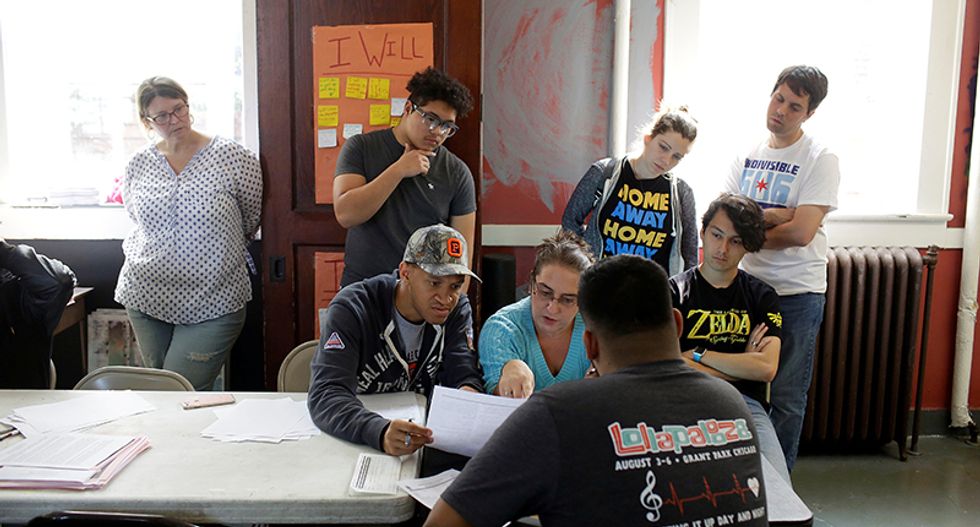 FILE PHOTO: Volunteers help a Deferred Action for Childhood Arrivals (DACA) recipient fill out his renewal application during the immigration ministry at Lincoln Methodist Church in Chicago, Illinois, U.S. September 10, 2017. DACA recipients gathered to fill out applications to renew their permit before the October 5 deadline for current beneficiaries. REUTERS/Joshua Lott

FWD.us, a pro-immigration group co-founded by Facebook Inc Chief Executive Mark Zuckerberg, is raising funds to help undocumented immigrants brought to the United States as children reapply for a program that shields them from deportation.

President Donald Trump on Sept. 5 moved to rescind in March the Deferred Action for Childhood Arrivals program, or DACA, which protects immigrants brought into the country illegally by their parents.

Such immigrants, known as Dreamers, who have work permits that expire before March can apply to renew them for another two years, if they do so before Oct. 5.

But the $495 application fee is an "extraordinary and unexpected expense" for many who are students or low-wage earners, FWD.us said in a statement.

FWD.us is working with United We Dream and other lobby groups to raise money for The DACA Renewal Fund operated by ActBlue Charities, an online group with close ties to the Democratic Party.

FWD.us was launched in 2013 by Zuckerberg and his Harvard University buddy, entrepreneur Joe Green, to lobby for changes to U.S. immigration policies. It advocates the issuance of more work permits and entrepreneur visas for immigrants who plan to start companies.

Technology companies such as Apple Inc, Alphabet Inc's Google Inc, Microsoft Corp and Facebook have made strong public statements against Trump's policy and voiced support for employees affected by the change.

None of those companies immediately responded to requests for comment.