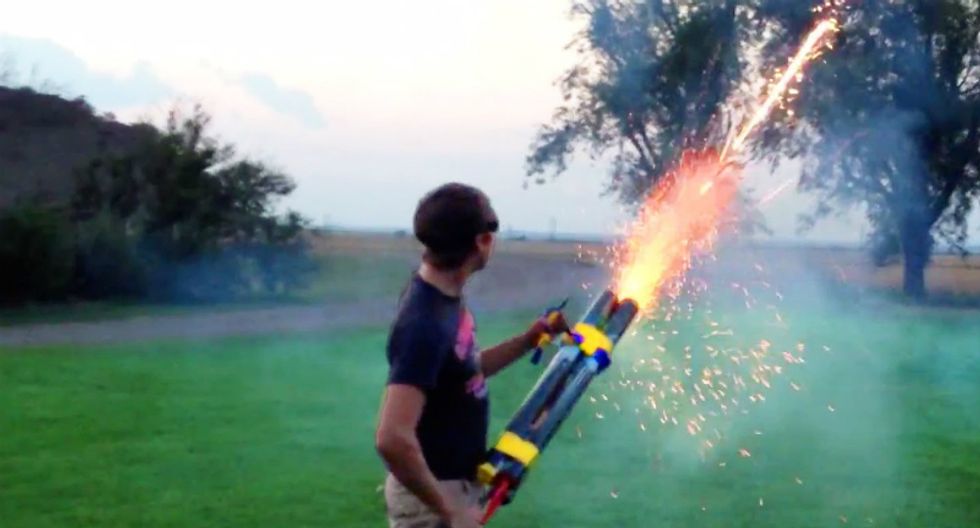 A six-year-old whose father shot him with flaming pellets from a firework gun gave a different account in court from what his father originally told police, Tacoma, Washington's KIRO7 news channel reports.

Court documents revealed that the unnamed six-year-old boy, who was treated for burns in July, was the subject of his father's ire after he allegedly didn't answer questions about his mother's whereabouts.

"He shooted me with a firework gun," the child said.

His father, however, told police a different story -- that he'd been trying to teach his son about gun safety when the gun accidentally went off.

"He didn’t point it at the child, he said, but a round exploded when he was trying to open the gun to load it," KIRO7's report noted.

The father has since been charged with third-degree child assault.

The closing statements of Alex Jones lawyer unfolded on Wednesday afternoon as Mark Bankston argued that the fringe host was the same as a Holocaust survivor.

After arguing that the Sandy Hook families couldn't even spend all the money if they were awarded it, Bankston explained that coming after Jones means no one is safe.

"The lawsuit in federal court in Washington claims Navarro used at least one 'non-official' email account — a ProtonMail account — to send and receive emails," the Associated Press reported.

Democratic challenger Mandela Barnes slammed Sen. Ron Johnson as a "self-serving, multimillionaire" on Tuesday after the sitting Republican from Wisconsin called for making both Social Security and Medicare discretionary programs—a reform that would pave the way for the GOP to realize its half-century-long dream of dismantling two of the nation's most essential and popular social programs.

Speaking on a right-wing radio show earlier in the day, Johnson criticized the "mandatory" spending demanded by Social Security and Medicare, guaranteed benefit programs available to all Americans and overwhelmingly popular.