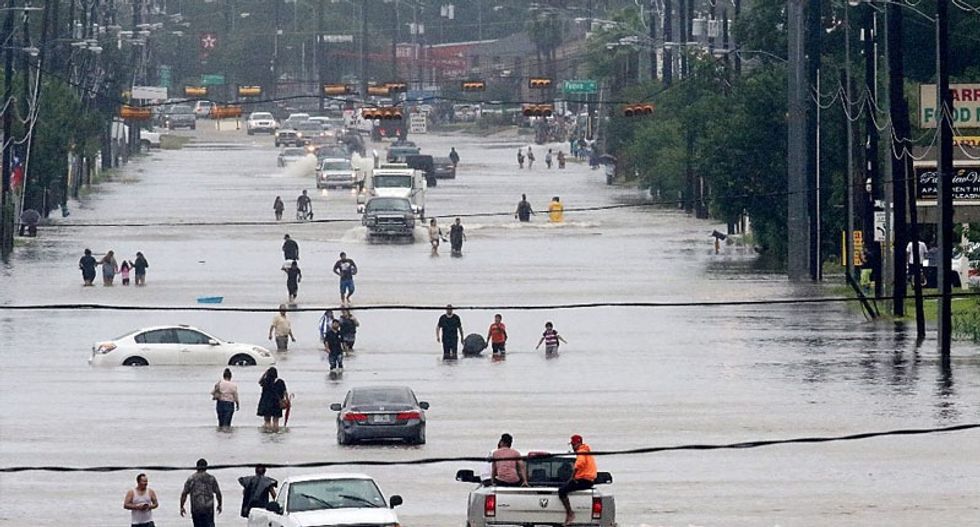 Flood-hit Houston, the fourth-largest US city, was among the areas hardest hit as Harvey deluged the state of Texas (AFP Photo/Thomas B. Shea)

The Hill said Saturday night that FEMA were sold at discounted prices and were 2017 models that were ready to use or had only minor problems like flat tires or a lack of furniture.

A report from the Associated Press said that analysis of government data shows that in the 48 hours before the massive storm made landfall -- and caused one of the most urgent housing emergencies in U.S. history -- FEMA sold more than 100 units at "fire sale prices," in spite of the fact that the agency had been warned that Harvey "would inflict unprecedented damage."

"The auctions -- about 300 since the beginning of the year -- have left FEMA with a standing fleet of only 1,700 units," the AP said. "The agency has put out bids for another 4,500, but officials could not say when they would be ready to meet needs arising from Harvey, Irma and potentially future storms."

Dr. Irwin Redlener -- director of the National Center for Disaster Preparedness -- told the AP, "There’s a vast chasm between what they can supply and what is actually needed."

The discount auction, Redlener said, was "an unfortunate decision."

About 79,000 homes in the Houston area were flooded with 18 inches of water or more, said Michael Byrne, FEMA’s federal disaster recovery coordinator in charge of Harvey.

He said that the trailers his agency sold were used units that had been returned from flood relief in southern Louisiana with damages that made them unfit to reuse.

“The ones you will hear about being auctioned are the used models that we’ve determined it’s not cost-effective to refurbish. We’re very rigid and strict about what we’ll refurbish and it’s got to be something that quite frankly any one of us would be comfortable living in and willing to put our families into,” Byrne said.

The AP's research showed, however, that the trailers offered for sale in the auction were advertised as "either without problems, or with only minor damage, such as flat tires, buckling trim or missing furniture."

"FEMA has auctioned off trailers during disasters before," the AP noted. "As Superstorm Sandy churned up the Atlantic coast in 2012, dozens of trailers sat idle in a supermarket parking lot in Northeastern Pennsylvania -- about two hours from the New Jersey coast."