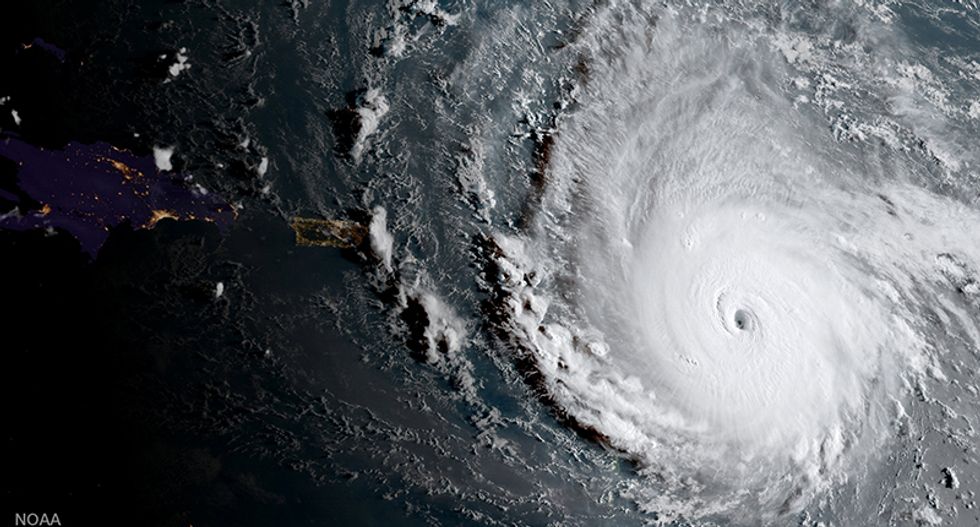 The U.S. National Hurricane Center (NHC) in Miami forecast the storm would make landfall in Florida on Saturday, although Irma's precise trajectory remained to be seen.

Forecasters described the storm as "potentially catastrophic." Irma ranks as one of the five most powerful Atlantic hurricanes during the past 80 years and is the strongest Atlantic storm ever recorded outside the Caribbean Sea and Gulf of Mexico, the NHC said.

Mindful of the devastation wrought by Harvey days ago along the Gulf Coast of Texas and Louisiana, Florida officials were taking no chances.

"Normally, people here don't like to prepare," said Gary Palmer, a 60-year-old deputy sheriff who visited a home supply store in Fort Lauderdale. "But what happened in Texas opened up everybody's eyes."

Authorities in the Florida Keys, the popular resort archipelago stretching from the southern tip of the state's mainland peninsula, called for a mandatory evacuation of the islands' visitors, starting at sunrise on Wednesday.

Roman Gastesi, administrator of Monroe County, which includes the Keys, said a mandatory evacuation of residents there was likely at some point.

Residents of low-lying areas in densely populated Miami-Dade County to the north were urged to move to higher ground by Wednesday as a precaution against coastal storm surges.

Public schools throughout South Florida were to be closed ahead of the storm, starting with Monroe and neighboring Lee County on Wednesday and Miami-Dade and several others districts beginning on Thursday.

"My wife is leaving the Keys today," Monroe County Emergency Management Director Martin Senterfitt said in a statement. "She would rather go to the dentist than sit in traffic. The sooner people leave the better. If ever there was a storm to take serious in the Keys, this is it."

Scott has also directed all 7,000 of the state's National Guard troops to report for duty Friday morning, saying additional Guard members would be activated as needed beforehand.

"I spent a while today collecting water," Nimmons said. "I hoard Mason and salsa jars so that finally paid off."

She also planned to stock up on candles, matches and canned food.

Annisa Ali, 45, who just moved to Oakland Park, Florida, from New York City said she was having a hard time finding water at local stores.

"Last night, I went to Wal-Mart. No water. I went to Target. No water. Now I'm here. No water," Ali said at a grocery store in Wilton Manors, Florida.

James Foote, a 56-year-old handyman in Fort Lauderdale, said he was unable to find any plywood to nail over windows at a local home supply store on Tuesday. He said more wood was expected to be delivered on Wednesday.

"I will be back tomorrow before this place opens at 7 o'clock," Foote said. "I've waited in lines for concert tickets before. This is way more important than that."