For Houston homeowners, tough decisions on whether to rebuild 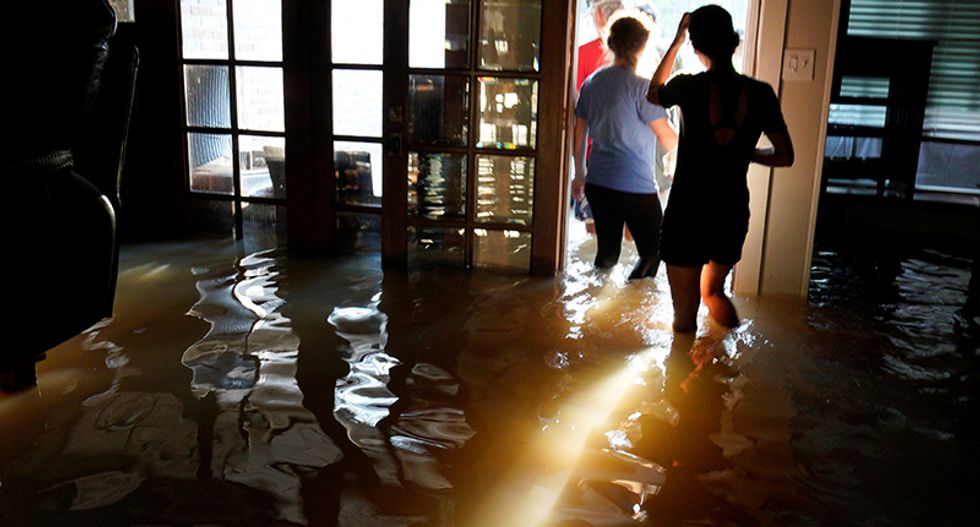 A family that wanted to remain anonymous moves belongings from their home flooded by Harvey in Houston, Texas August 31, 2017. REUTERS/Rick Wilking

It took just hours for Tropical Storm Harvey's floodwaters to destroy hand-hewn cabinets and wood floors that Chad Wilson spent more than 18 months to build and install in his Houston home.

Wilson's first thought after the waters receded and he girded himself for a Herculean cleanup is one echoing across the storm-weary Texas coast: should he rebuild?

With most of the home, which had never before flooded, now gutted, Wilson says he will only remain if he can raise its level above the ground by up to six feet (two meters).

"We will not live in this house at this elevation again," said Wilson, who teaches at the University of Houston. "It was too traumatizing."

More than 203,000 Texas homes were damaged or destroyed by Harvey, which dumped as much as 52 inches (132 cm) of rain across the region and killed as many as 60, according to authorities.

Some of those homes are still flooded. Two area reservoirs will for at least another 10 days release water into an overflowing drainage system to relieve pressure. That has some advising homeowners to demolish their homes, rather than repair them.

"If flooding in some homes persists for weeks, the likelihood of saving them diminishes rapidly," said Ron Witte, a professor of architecture at Houston's Rice University.

For those homes that will be restored, owners face what are expected to be shortages of materials and equipment, a scenario that plagued Louisiana after Hurricane Katrina in 2005.

"I guarantee you there's going to be a shortage of Sheetrock in Houston during the next three months," said Roger Cooner, a Houston-based architect. "There are tens of thousands of homes that need Sheetrock torn out and replaced."

Finding a place to stay also will be tougher. Houston's real estate market is expected to tighten because of Harvey's onslaught, exacerbating the plight of storm victims seeking shelter.

Before the storm, the city had 70,000 vacant apartment units. Some of those were damaged, but many likely will be rented quickly, said Jeff Hall of the Houston Apartment Association, which represents landlords.

"It's going to be really tight now," Hall said.

For the city's home sales, which were already soft because of a two-year oil price downturn, Harvey adds yet another kink. Some "For Sale" signs on properties around the city are already bedazzled with notices to entice prospective buyers: "Did Not Flood."

"Home sales are probably going to have a stigma for a while until we have things cleaned up," said Jennifer Fuller, a real estate agent with Keller Williams Memorial.

"I would advise anyone with water in their home to keep all documents related to remediation and take pictures so they can put the future buyer at ease about what was done."

It's not clear, though, if there'll be much of a demand for homes that were waterlogged.

"I don't know that I would want to own a house that has been sitting in water for more than a day or two," said David Stone, owner of Texas Fine Homes, a residential home builder in Houston.

After Melinda Loshak's one-story home in the city's Meyerland neighborhood flooded two years ago, she and her husband renovated it and put it on the market.

With no prospective buyers, they leased it, only to see it flood again last week.

"It doesn't make any sense to repair this house if it's just going to flood again," she said.