'He didn't even call the Charlottesville murderer that': Internet unloads on Trump for calling Kaepernick an SOB 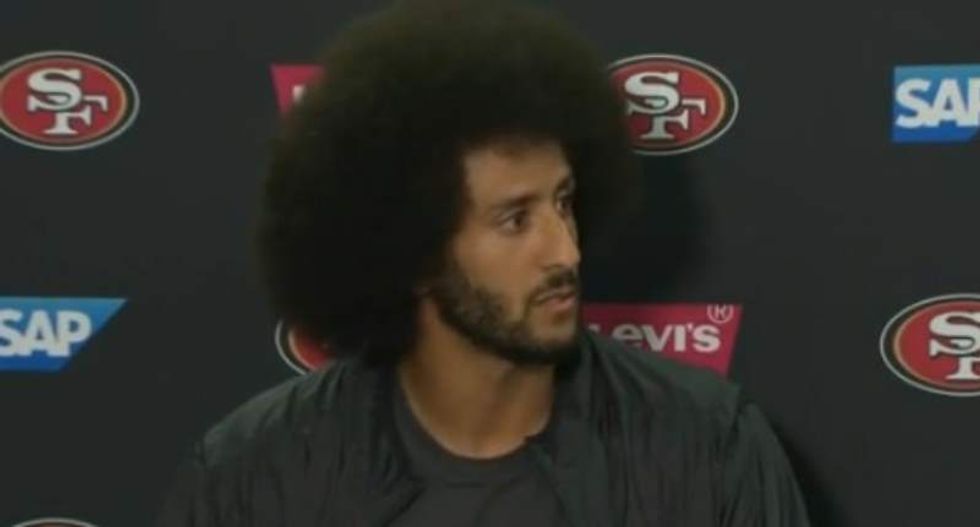 After President Donald Trump alluded to controversial former 49ers quarterback Colin Kaepernick a "son of a b*tch" during a rally in Alabama, Twitter exploded.

"Trump used harsher language to describe Kaepernick than he used for the Neo-Nazi who killed Heather Heyer," Christiana Mbakwe‏, a writer for "The Daily Show with Trevor Noah," tweeted.

"Colin Kaepernick is a real patriot and a fantastic human being," another user wrote. "Donald Trump is a tool and a traitor."

Others, like activist-journalist Shaun King, mused about how unusual (and dangerous) it is for a sitting president to use that type of language.

"The POTUS said son of a b*tch on primetime," one user noted. "What a time to be alive."

Read some of the best reactions below.

Prediction: Not one NFL owner, not Roger Goodell will say one word about what he said about Kaep or other NFL playe… https://t.co/Ac71qVPOqR
— Jemele Hill (@Jemele Hill) 1506130042.0

Why are you even bringing up Kaepernick's name at a political rally in Alabama? Never mind. I know the answer.
— mike freeman (@mike freeman) 1506129735.0

Donald Trump referred to Colin Kaepernick as a 'son of a bitch' at his Alabama rally? He didn't even call the #Charlottesville murderer that
— Cyrus McQueen (@Cyrus McQueen) 1506130965.0

Black man uses his position to draw attention to a controversial, important issue. White president calls him a son of a bitch.
— Scott Weinberg (@Scott Weinberg) 1506129374.0

Trump was quicker and more vehement in his hatred of Colin Kaepernick’s non-violent protest than he was of Nazis. Take note of that.
— Anthony F. Irwin (@Anthony F. Irwin) 1506128712.0

To be clear, Colin Kaepernick's "crime" is protesting systemic racism and police brutality. Trump called him a "son of a bitch" tonight.
— Ben Gardner (@Ben Gardner) 1506131057.0

Donald Trump referred to Colin Kaepernick as a 'son of a bitch' at his Alabama rally? He didn't even call the #Charlottesville murderer that
— Cyrus McQueen (@Cyrus McQueen) 1506130965.0

#Trump took a swipe @Kaepernick7 about players kneeling during the anthem but Trump is ok with the confederate flag… https://t.co/wqekrlJCnP
— Joseph Esparza (@Joseph Esparza) 1506127913.0

.@realDonaldTrump has attacked Colin Kaepernick with more conviction than he has NAZIS. 🤔
— Michael Skolnik (@Michael Skolnik) 1506130606.0